While I contemplate next steps on my Pfefferneuse quilt I decided to work on this quilt.  It's from the book Allegro by Atkinsons Designs and is called Matchstick Marimba.

I had cut out the majority of this quilt back in 2010 or 2011.  Three of the six rows were pieced.  I sewed the other three together last night then assembled them into the top you see here.i have to add another row at the top and bottom to finish off the checkerboard pattern. 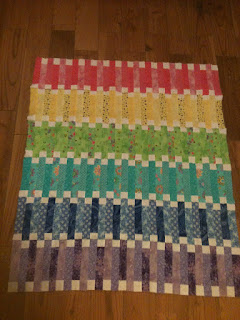 The blocks all around the outside edges are intended for the outside border.  My original thought was to put a double border between the whole and half blocks.  The intention was to make it appear that you are looking down into a glass jar and the borders represent the mouth of the jar.  One border would be a grayish black color and the other a blackish/whitish stripe.

When I laid it out I didn't expect to love the nice clean look of the quilt just as it is.  I would only have to put a quarter of a pinwheel in the corner or piece smaller pinwheels for those corners.

I'm going to move onto another quilt while I entertain everyone's input.  When you look at my quilt think about those spearmint starlight candies.  That was my inspiration for the green pinwheels. 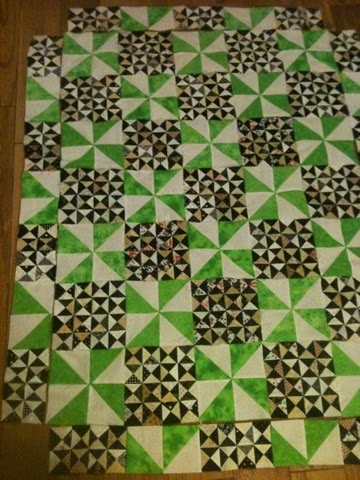 One of These Things is Not Like the Others

Unfortunately it is the only one sewn correctly in this pic.  Three sets of twosies out of 24 isn't too bad. I quickly corrected them and made foursies.  Sadly 5 of 12 of those sets were sewn wrong.  I forgot it made a difference at that stage.  They are all unpicked and ready to be sewn again.
I hope to be showing the sewn center of the quilt tomorrow. 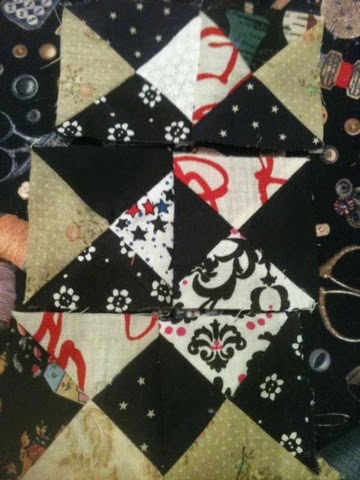 Chalk Outline at a Crime Scene?

Nope.  It's just me being silly.  I laid out my pieced border.  More designing will be needed after I get the center and the inner border done.  What I have planned will not have those corners touching as shown in the picture.

I hope you get to play this weekend.  Take pause to remember our fallen soldiers. 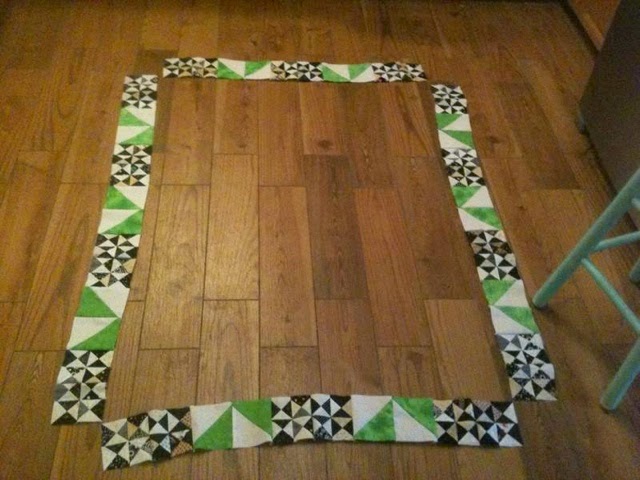 All the pinwheels are made.  A plan has been hatched.  Need 12 of these units.  Next step is to work on my pieced outer border using the components from the blocks shown here.  I'd like to get this topped right away but I'm not sure I have the fabric I need for the inner border.  Darn.  I have to fabric shop! 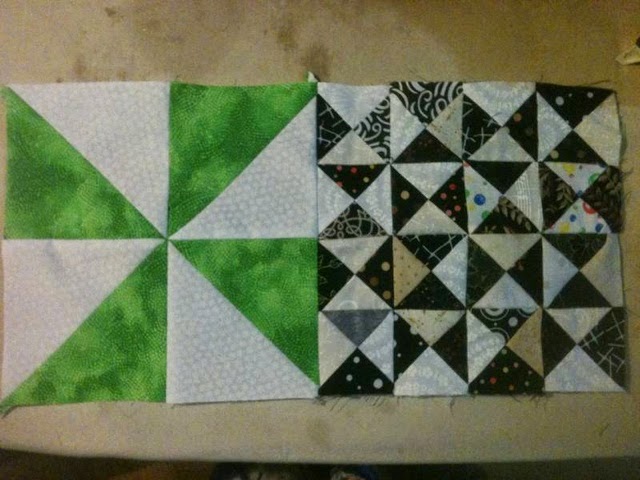 Do Any of these Scream NO?

Do any of these greens stand out too much from the others?  I can stay with the four I already have or add some or all of the three greens on the right.  I i love auditioning with the camera.  I'll be working on the QSTS units for awhile to determine how many half and full pinwheels I need.  I really hope I don't need more QSTs.  Why oh why didn't I make notes??? 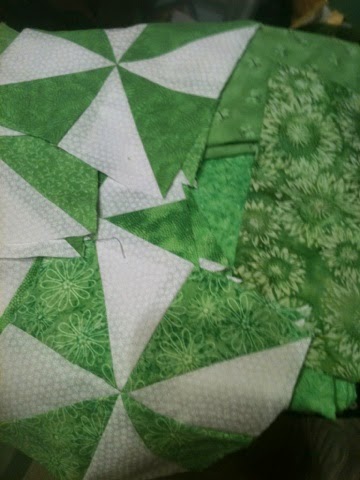 Remember Orca Bay?  I was gifted so many pieces and parts for that quilt.  When I finished the second quilt top I had hundreds of QSTs leftover.  I sat and thought about what to do with them.  I don't recall how I happened upon the Pfefferneuse quilt but decided that was where those extra pieces would go.
I looked at the quilt picture and counted how many broken dish units I would need.  I had a good number but not enough.  I created the 4 unit pieces you see here.  I think there are 84 or 88 of them.  At some point I realized my broken dish units were much smaller than what Bonnie's pattern balled for.  Because of this I probably have many more than her quilt calls for.  Remember my purpose was to use up the spare units I already had.
While I was making the broken dishes I began thinking about what color pinwheels I wanted.  I originally thought red but didn't have enough of the shade I was looking for.  As I look at this quilt I can't help but think of starlight candies.  I googled them and was surprised to see they come in a rainbow of colors.  I began selecting those colors but just was not in love with that idea.  I came upon a green in my stash that I loved.  Alas I did not have enough.  I should have shopped for similar shades but did not.  Rather than look through my stash and pull greens I just went to the store and bought three different greens.  I was going to use just one but have now cut from all three and even pulled a piece from mom's stash and have included it.  As I type this I know I have another green that will work and will throw it in.  They are all the same color green but have different patterns to add to the visual texture.
This quilt can be found in Bonnie Hunters "String Fling".  I am not making my pinwheels with strings.  The white in the pinwheel is all one fabric.  So off I go to make more pinwheels.  Be back with an update later this week.  My goal is to finish up all the pinwheels that I'm going to need. 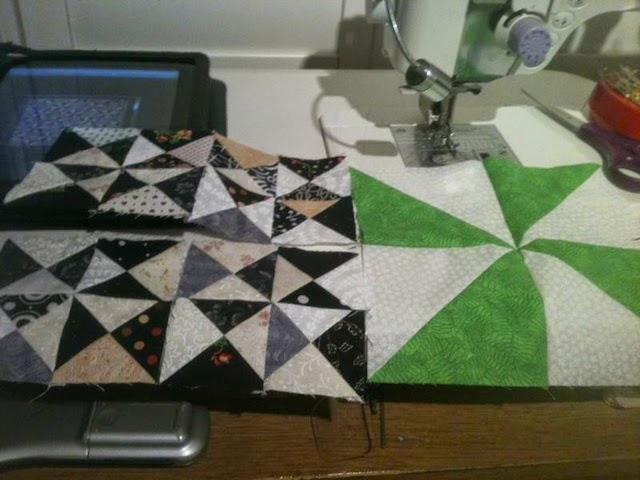 Ready for quilting!  Onto the next project. 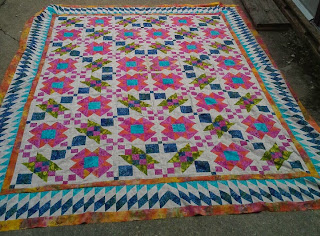 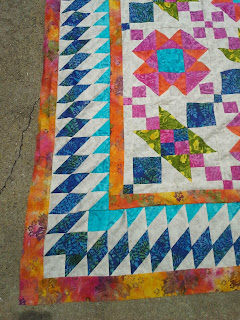 Oh my....more decisions.  I've cut up all my blue batik into 2" strips already.  Whatever the decision I am going to have to piece fabric.  In my mind I think I have eliminated option 3 below.  I am leaning more toward option 1.  What do you think?

I am linking up to Patchworktimes.  For more design walls click here. 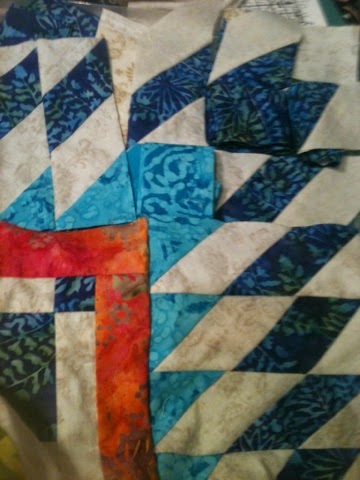 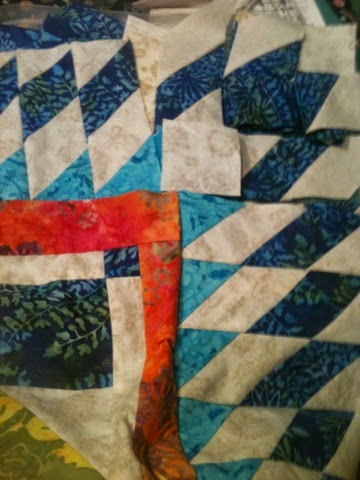 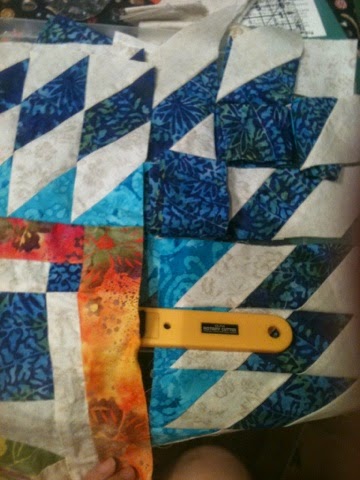