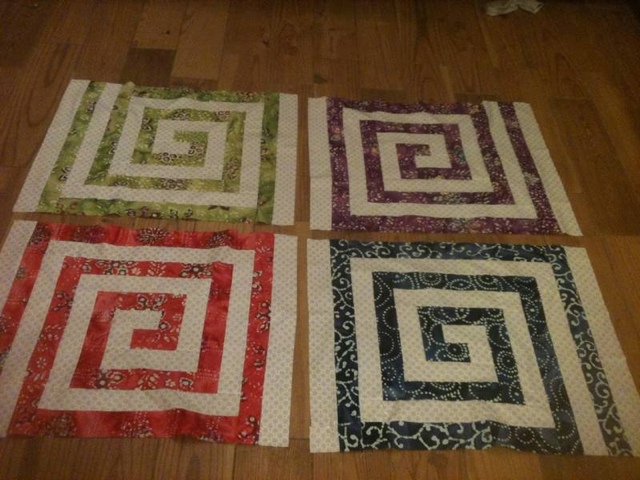 I am not going back with the seam ripper but if I did it again I would switch the purple and green.  But due to the mirror imaging it's not that easy.  This is made from 2.5" strips but I would like to play with it on a smaller scale.

Hop over to Patchworktimes to see what everyone else has on their design wall. 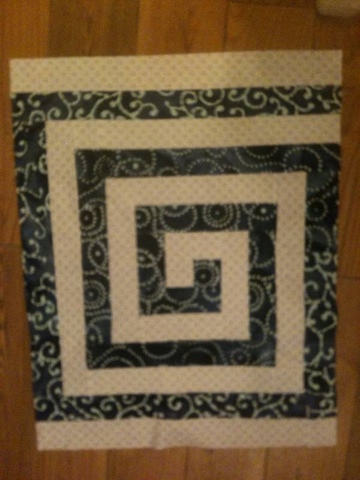 I bought the pattern Dizzy by Tiny Seamstress Designs back in March or April. I had passively been thinking about what colors I wanted to use.  I recently went on a shopping excursion to buy some neutrals.  When I got home with my purchases I auditioned the Stripz jelly roll and chose a background.  Above is the first block.  I'm planning to tweak the pattern just a little.

I have all my blocks made for Avignon Picnic.  I might play with the layout tomorrow and start assembling that top.  Will see what catches my attention tomorrow.

I have the center of the denim quilt assembled.  I have the border and backing chosen.  Need to do some cutting.  The backing needs to be expanded.  Undecided on how that will be accomplished.  Pictures once it's bordered.

Here is a block from Avignon Picnic.  Click the link for a full picture.  I have since picked this apart, into halves, because I didn't like the pink and brown all smoothed together.  My picture is turned sideways.  I am NOT enjoying assembling these blocks.  I think it's because I want thing spread out well and do not want them all to be the same. 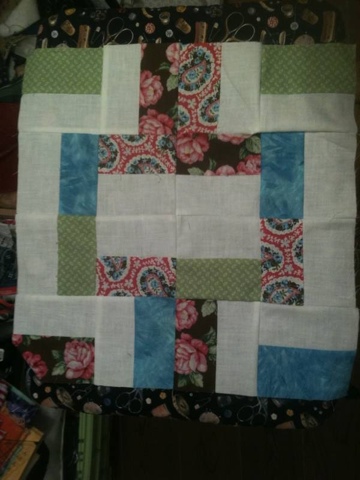 I sat down with my iPad and wrote down all the possible combinations.  Do you know how to determine how many unique combinations you'll get?  I have 4 units that I want to be uniquely placed in the block.  I can use any of the 4 for the first position.  Then for the second position that leaves 3 choices, 2 for the third position then 1 for the fourth position.  This results in 4 x 3 x 2 x 1 or 24 unique combinations.  I am planning to make a 3x4 layout that will require 24 blocks. Hey, that worked out great.

Shown here are my units and my list of possible combinations.  Once I sew them together I will check them off.  Decisions removed.  I'm ready to sew it together now! 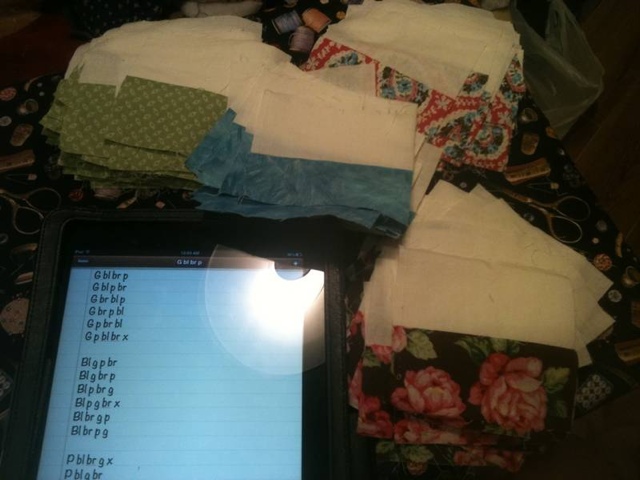 Not shown here is a big hunk of gray, a big hunk of yellow and a little gray floral.  This is heading to be a very modern looking baby quilt.  It is inspired by a pillow I found on Pinterest.  I just have to write down the measurements I need.  Pictures coming soon.

Here are some fabrics I pulled from a Stripz jelly roll.  I found mine at Walmart but I think JoAnns Fabrics carried them as well. In fact I think the jelly roll I used for Avignon Picnic was also a Stripz jelly roll.  I was auditioning the strips I chose with three different neutrals for the background.  I was really leaning toward the white which has a circle/swirl of white dots.  I just bought another neutral and it has a more dominant circle pattern to it.  I think that's the winner.  I am going to make Dizzy by Tiny Seamstress Designs.  I already plan to slightly alter the layout.  Typically I am a Prewasher but since the jelly roll won't be washed I'll skip that step for this one. 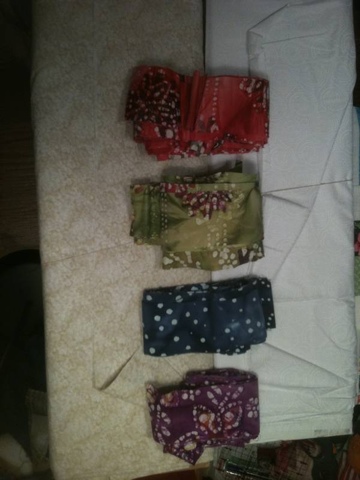 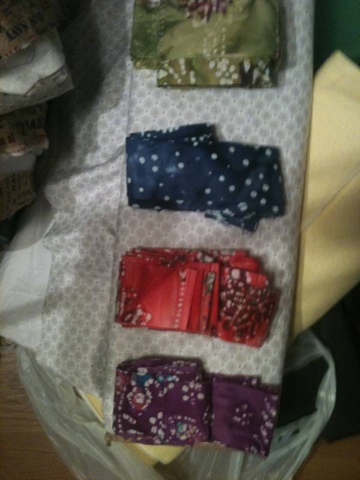 Some time ago I pulled out a jelly roll that was languishing in my sewing room.  There may even be two here.  One from my stash and one from my mothers.  I had seen a video from Missouri Star Quilt Company.  They had you sew 4 strips together then cut squares from the strip set then cut those on the diagonal and put them together.  I made one block and thought what a muddled mess.  I like the colors well enough but there is not enough contrast for my eye.
This project has been sitting and sitting.  When I tidied my sewing room I put it in its own project box.  As I topped other projects I began thinking about what's next.  This one bubbled to the top enough for me to want to unpick all the strips.  That in itself took 5 or 6 hours.  I pressed and sorted them all and started searching jelly roll patterns.  I found several but decided on Avignon Picnic at Moda Bake Shop. 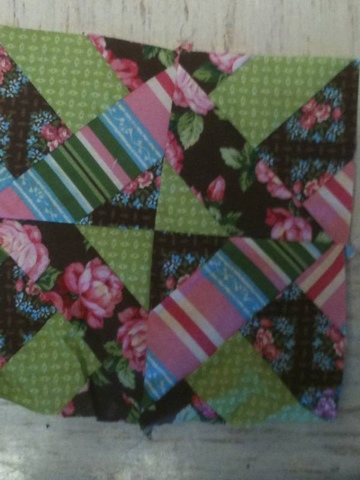 The pattern doesn't really say how many strips are needed.  I pulled a neutral from my stash and cut as many strips from it as I could.  I also pulled a blue from my stash to brighten things up a little.  Below is a practice layout.  The brown blends in with my ironing pad.  I think it will look good.  Better than the blob in the top picture! 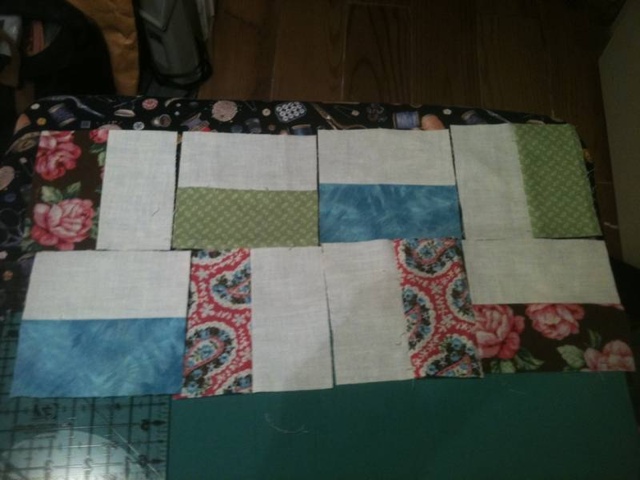 Another project that I resurrected was this denim and flannel project.  I bought 4 100% cotton shirts from a garage sale just because.  That spurred me on to get this quilt top together.  My boyfriend also had a flannel shirt that somehow got bleach on it.  That and the garage sale finds all got cut up and used.  I had already made 18 blocks.  I had a pair of jeans already set aside.  I cut those up and went and snagged another pair from my boyfriends closet.  They were a pair that I gave to him at least two years ago and he never wore them.  They were patched and intended for him to work in.  It's ok.  They are perfect in this top!  63 blocks in a 7 x 9 layout.
I have the first two rows assembled and intend to get more of them done today (Sunday).  Then I have to decide on a border.  It will be just a small one to stabilize the denim against the flannel and shirtings.  I'll post again when these are nearer the top stage.. 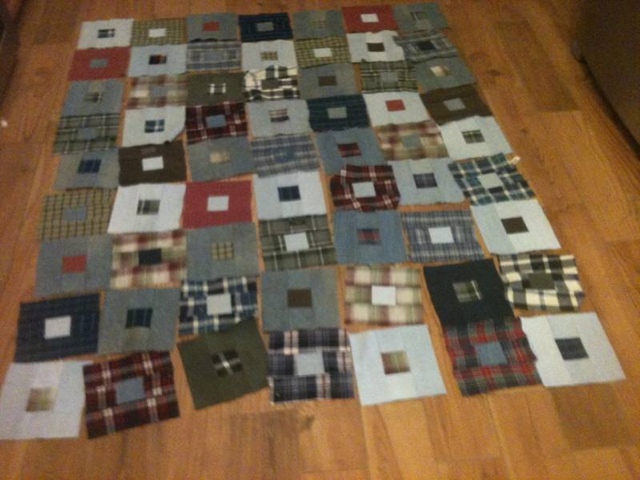 Head on over to Judy's to see what others have on their design walls.