I met my goal.  The completed quilt for my great niece.  I quilted it and bound it and mailed it a few weeks ago. 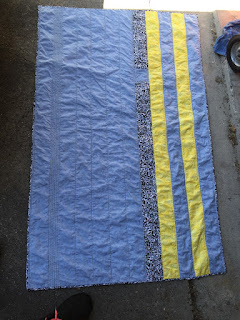 This is the back.  I wanted it to be bright for contrast to the front in case the recipient's mother didn't like the front.  I got a thank you message through facebook saying she loves it and it matches the nursery.  Still waiting for the requested picture of the baby on the quilt. 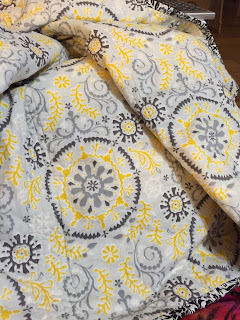 To see what others finished in September click here.

Decluttering with the KonMari Method

I have spent a good amount of my life acquiring things.  But now I spend a good amount of my life de-cluttering things.  I find myself attached to the silliest of things.  I would get attached to my kids toys for example.  I at some point managed to let go of things.  I had to find a good steward of my things that I could entrust with these treasures.  It helped.  I told the recipients to never tell me when they let go of these items.

When my husband passed away I still had to find a good steward for my things.  But I was willing to let a lot more go because I knew that someone could make good use of his things NOW not later.  I let go of piles and piles of clothes and shoes to name a few.

Many of you  have heard of FlyLady. She has you work on your daily routine which includes dishes and quick swish of the toilet for example.  Then she has you work on a room a week going around the room in a methodical way sorting and getting rid of things for a specified amount of time.  She made sure you left time at the end of your session to properly take care of your sorted piles.  You repeated week after week until theoretically you were done.  I needed her when I first started getting rid of things.  I think she appealed to the depressed and overwhelmed.  She encouraged you to just do something, anything, but keep trying.  I was pretty good about following along with her weekly email reminders.  She was getting you to clean a bit as well.

When I had my house fire I had a big wipe the slate clean moment.  I moved back into my house and everything was freshly cleaned, painted and put back together again.  I had a garage full of boxes and 2 storage units filled with boxes and stuff.  My house had what I wanted in the rooms at the time.  I went to the task of getting all the things in the garage sorted and given away or put away.  I then had the daunting task of bringing everything from storage and putting it in my garage.  Actually it was all hauled out onto the driveway and was sorted into categories.  Some of the things I knew I wanted to keep or to spend more time sorting through were placed in the attic for storage.  Then there were the things that I could sort through relatively quickly and get rid of.  I still had too much.  This was in May of 2012.  This is when I started disposing of my husbands things in earnest..

I began bringing in boxes to be sorted from the garage.  I would put the boxes where I thought I wanted the contents ultimately stored.  It didn't take long to clutter things up again.  I did my best and tried to keep things grouped together.

The following year my mother passed away.  My Dad insisted that I take whatever I wanted of hers before I left town after the funeral.  I took what I could and gave away what I did not want.  I reasoned with Dad and he agreed to let me set aside the larger items to be picked up when I could return.  What I did bring back from those trips just added to the clutter.  More clothes, furniture, fabric and sewing paraphernalia.  The water was rising in an already over my head depth.  I continued to try to sort and give away.  The strong emotional attachment was there again.  Even worse than before.  But I continued to pick away at the clutter.

About 7 months after Mom passed I got a call from Dad that he was sick and had fallen at home.  I ultimately had to go to him to help sort his medical situation out and make some decisions about his future.  Long story short we packed up his house, sold it and he moved in with me along with all his stuff.  By the end of May he passed away.  Now I had all his stuff to deal with.  More furniture, clothes and stuff in general.  Not to mention all the paper and the estate to settle.  Again,  the picking and choosing of what to give away continued.  More stuff to the attic, more giving away of large objects.  Still identifying those good stewards of my parents precious things.

I am not exactly sure how I came across the KonMari method.  She is so totally different than FlyLady.  She has five categories that she wants you to work on.  The first of which is clothes.  She wants you to gather all your clothes into once place regardless of the season they are for.  She wants you to be shocked by how much stuff you have.  She then wants you to touch each item and if it "sparks joy" you keep it, otherwise you dispose of the item.  She encourages you to thank it for serving its purpose in your life.  She also encourages you to quickly move through this activity and stick with it until you have gone through all your clothes.

I have neither the energy nor time to gather ALL my clothing into one place and do a massive sort.  Not yet at least.  But I did realize that I had two laundry baskets piled high with socks.  I would start there.  How did I get so many socks?  Well there were Mark's socks that fit me and I liked to wear.  There were the socks that my mother did not like for either her or Dad and she passed them to me.  Then when they both passed I inherited their socks.  Ray's socks were mixed in there and so were my son's.  My daughter had a few cast offs but for the most part she manages her own socks.

I went through the basket and started pairing up things.  I then selected the socks that belonged to each person.  I chose a number for each person and more or less stopped picking the ones I liked when I hit it.  I still had a huge basket full of good, wearable socks that are now paired and sitting in a tote awaiting donation this weekend.  There were very few that I threw away because they were stained or holey.

The difference this time is that I was choosing what to keep rather than what to get rid of.  If I went with the philosophy of only keeping the good and tossing the bad then I was stuck in the cycle of still hanging on to too much.  For some reason choosing what to keep gave me the right mindset to let go of the excess good.  I still have socks that are mismatched.  Over time I will realize what is not mated and never will be and will toss them or donate them to someones sock puppet project.  But I can see how this change will make a huge difference for me.

I used to enter online giveaways for quilt items quite a bit. But I stopped because I felt like I had too much stuff already. I came across a giveaway for Darcy Ashton's new book of appliqué owls and entered. To my surprise I won her book. I had also entered the A Lovely Year of Finishes contest and was just notified that I won a pattern from Persimmon Quilts. I'm having a winning week.
Here is progress on my September ALYOF project.  All quilted and ready to be bound. 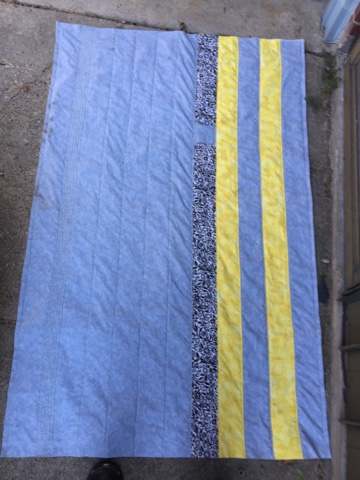 I met my second great niece for the first time back in May.  Her mother told me that the nursery was done in yellows and grays.  I cannot recall if I had already bought these fabrics first with the intent of making a modern quilt or if I bought them after learning this information.

I started my crawl through cyberspace to find a pattern for a baby quilt.  I came across a picture of a pillow that inspired me to make the top pictured below.  It has already been topped and is in the process of being quilted on my DSM.  Yes I know I have the Avante but I wanted straight line quilting and I don't have the tools or skills to accomplish that on her yet.

My goal for this ALYOF is to finish the quilting and bind and mail it to Madison by the end of the month.  To see other peoples goals for A Lovely Year of Finishes for September click here. 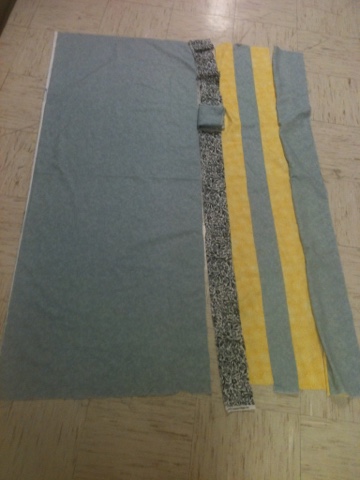