Getting in the Groove
This is the start of my third week in Monroe. Work has been somewhat slow due to issues with other groups getting the work done with quality so that we can begin our work. Every day we have promises of work to do but so far very little has been delivered. Right now I take advantage of that by leaving early on Friday in order to get home in daylight.
On the apartment front I have a real bed, my kitchen is totally setup and I have t.v., phone and internet service. My living room looks like a college kids apartment since I am using 6 foot banquet tables for the t.v. and my sewing. I have a reclining lawn chair for my living room furniture. I am trying to avoid charging things as long as I can. I feel that I have a livable situation and will add furniture as I go. My next exciting purchases will be a nightstand and lamp and some sort of t.v. stand. All in good time.
The apartment is nice and the neighbors are too. I have heard very little noise from them so it seems like a well insulated place. I have put in a few service requests. Nothing too major though. When dd was here she noticed a dusty substance coming up from the floor. I ran the vacuum and there was a white chalky substance in the carpet. I found it in several areas of the apartment. I think it is carpet deodarizer that you sprinkle then vacuum up. I mentioned this to the management office and they are sending the carpet cleaner to clean the carpets. I spent last night cleaning the apartment so that I had everything off the floor. I think this will mark the last of someone coming into my apartment to do something to it for awhile.
I have a neighbor on the downstairs level to the side that has his patio covered with bird feeders. It is really nice to wake up and see all different birds outside my window. I have tried taking a few pictures but they are not the greatest. I will continue to take them and see if I can improve. Here are a few varieties I have seen so far.

OK I havent done a stash report in a few weeks. Been a little busy so here goes and there was an increase for the Dallas show. 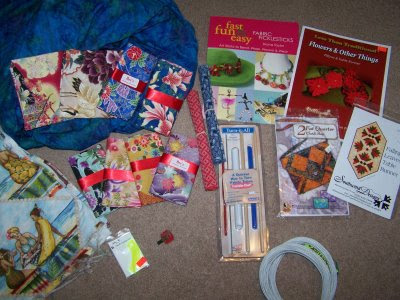 Dallas Quilt Show
I met up with my long time quiltchat friends. 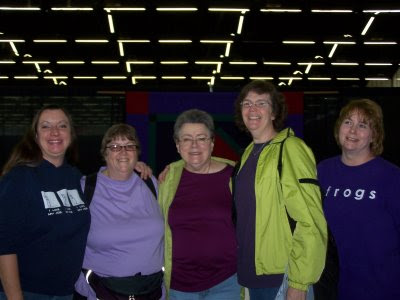 michele, purplefiend, scooter, swooze and arachnea.
I also got to meet new friends from various yahoogroups. 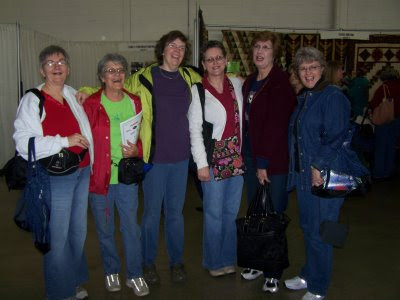 I got a strongly worded email from one of my blog readers and friend. She felt I was putting myself at risk by showing my apartment complex online and also my office. While I don't necessarily agree with the reaction my family does and got a little upset so I have removed those identifying photos.

If you would like to see the pictures email me and I will share with you if I know you.

Butterball greets me when I get home. Max won't let me touch him but he is curious about me. Someone who shall remain nameless let Butterball in my apartment so guess who thinks he lives with me now??? 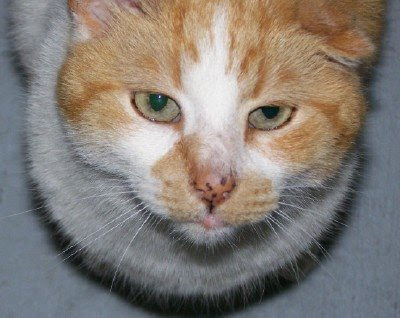 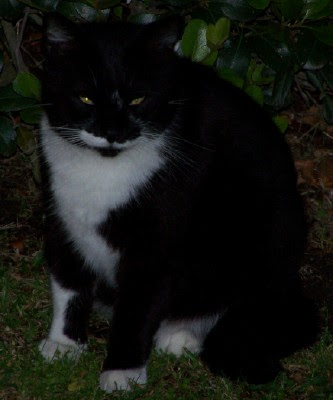 I was trying for a yellow and purple color theme. No pans in those colors so we did red. I now have a red crockpot too :). 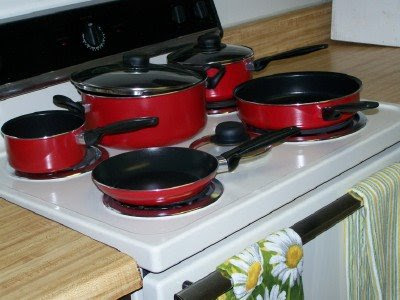 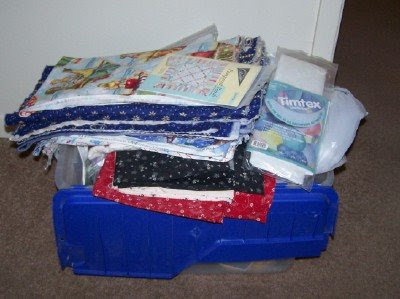 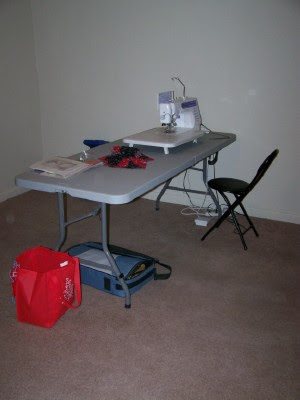 My stash consists of my kitted fabric. Should I bring more? My sewing area is in my living room for now.

Work and the Roads There 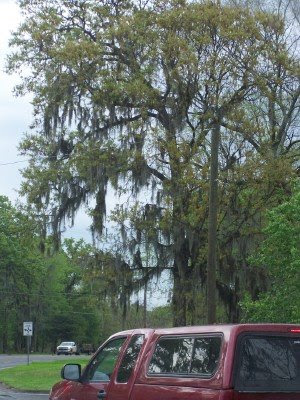 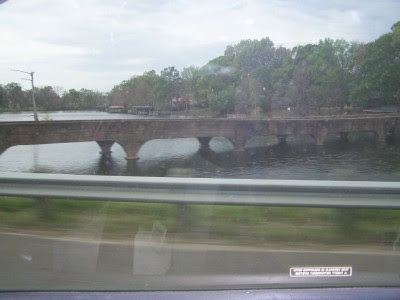 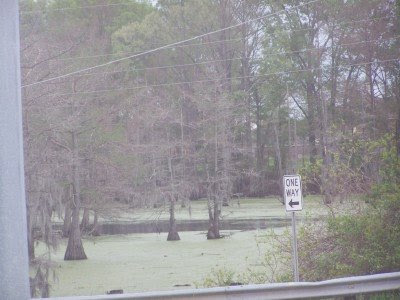 These are the sights on the way to work.

There are two cats hanging out near my apartment. They are not skinny by any means but do not seem to belong to anyone as they are outside at all hours. Should I put out cat food? Should I put out water? I know some of the neighbors are putting scraps out for them.

Please bear with me. I am still trying to get a computer setup at the apartment. The roadblock is deciding what to get. More than likely no pictures until then and not many other updates.

I made the 300 mile drive home over the weekend. It takes me about 4 hours and is a pretty straight shot. That reminds me...I better check the gas tank!

The time at home was too short. So much to do in so few hours. I did manage to pack up my sewing room, well a portion of it, and carry it home with me. It took me an hour to unload everything. I have to climb a flight of stairs and some of the things were very heavy. I even had to lay down for a few minutes (no chairs yet) to catch my breath.

I was good and setup and put away everything I brought. I pulled out fabric for my next quilt and washed it along with other laundry last night. I will have to setup the ironing board and iron and see how I like them. Both new. Tonight I will more than likely just sew on my Spring Breeze to get that top done.

So here is an interesting fact about me. I have never lived alone. Last night was my first night alone in the apartment. I locked my bedroom door. I fell fast asleep and slept hard. I will be fine. I took an upstairs apartment on purpose. I think it is safer for me. My mother asked me if I am lonely. So far, no. I think I will enjoy the peace and quiet. I will be talking with lots of folks and try to catch up on past friendships. In other words, I plan to make the most of my time.

I arrived safely this past Sunday. Checked into a hotel and found something to eat. What did we eat? Wow I can't even remember now. Taco Bell? DD and her friend are with me. DD wanted to be here to help choose the apartment and furnishings.

We drove around to look at the two apartment complexes I was interested in. Before I arrived I was more interested in one than the other. After seeing them my mind shifted to the opposite. I am using hubby's GPS. Their directions are....interesting. Let me just say they are close enough. At both complexes I met a resident and asked about the place. Both received good reviews.

The girls went to check out the pool at the hotel. Covered and closed. Oh well.

Monday I reported to work. Had an orientation of sorts. Had my badge made. Drove to a nearby lab for a drug screen. I returned to the office and had lunch while waiting for my supervisor to get ready for us. We had a meeting to go over some things to get setup with access etc. Once that was over they let me leave to go look at the apartments.

My original first choice only had 2 bedroom apartments. The other was full with nothing open until May. Both apartments are on train tracks and the apartment I was shown backs up to the track. I asked how frequently and when the trains passed. There was some vague response and then here comes a train. Very slow moving, quiet and only an engine and one car. I felt it would be ok and signed the lease.

Tuesday we checked out of the hotel and moved into the apartment. We went shopping and got a lot of things. Still had a long list left to buy but got the bare necessities so that we could shower and have something to eat. Wednesday the girls roughed it with no electronics. I did meet the cable guy at lunch time and he got t.v. service started. Phone and internet will be setup next Thursday. Things are slow going there.

Wednesday night another night of shopping for more stuff for the apartment. We got home and went to do laundry. 4 loads after only 3 nights here. Sigh... Did find out the machines are nice and efficient. Very quick. Went home and fell into bed.

So here it is Thursday. I have been in a 3 day meeting and am picking up some things. Refreshing my knowledge on some items so that I can hit the ground running when it is time. I leave tomorrow for home. I have a list of things to bring back from the house and hope to get back to sewing. It has been a very busy, exhausting week and look forward to getting my real schedule established so things become more routine here.

I didn't want my last week to go as it has been. Still digging out from the stacks of stuff that I sorted out. I have 2 days planned at the Dallas quilt show too. I leave Sunday for the new job. No pressure....no pressure......HELP!!

No change. I will more than likely be buying at the Dallas Quilt show next weekend.

They are all pressed now. I will be working to sew them into pairs tomorrow at least. If it goes quickly I will make them into complete blocks as well. Ahhhh progress!

I have all my HSTs trimmed now. I did use the 28mm cutter and liked the control I have. Now to press them all which is tomorrows task. There are about 90 or so. Should go pretty quickly.

How Big Is Your Rotary Cutter?

I use a 45 mm rotary cutter. For awhile there I thought I had gone out and bought a 60mm and been using that but then one day a friend sent me a pack of rotary blades without any discussion of size. When I got them, it brought me back to my reality.

I bought a 28 mm recently to use with some slotted rulers I bought. During my big sort out today I found one that I already owned.....sigh... It will get used, no worries.

So here is a question for you. I am currently trimming HSTs. I watch a friend of mine trim scraps. When she does this she uses a 28mm cutter. She seems to have good control with it so I plan to try trimming the rest of my HSTs with the smaller cutter to see if that works better for me. Things seem to slip around on me with the 45mm.

When you trim what size cutter do you use??

With everything else going on in my life right now I am going to keep it really simple.

I have now cut all my nickels down the middle between the sewn lines. I have them stacked in sets of 10 and am currently trimming them. When I get bored with the trimming I sew a little. Nothing exciting to see at this point.

I am still decluttering and getting things in order here. I reached a point over the weekend where I feel I can accomplish all that I had hoped before I leave on the 15th this month. Keep sending me positive thoughts that I can do all that I want in this remaining week and a half.