I am still plugging away at my Orca Bay. I needed neutrals and so I went digging in my Orca Bay box of love. This is all fabric that was donated to me so that I would have something to do or play with while I was separated from my stash.

First up are a few of the pieces that I finished using the 3.5" strips I found in the box. These seem to be very fiddly to me when trying to sew the two pieces together. I think I found my stride. Only have to make 100 of these suckers! 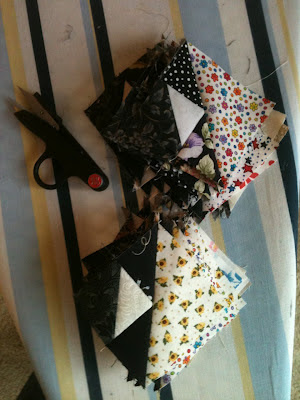 This picture shows most of the notions that I received in donations from Quiltville yahoogroup fans. 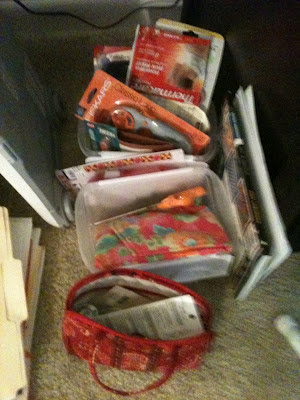 This is my Orca Bay box of love. There is everything from yardage to strings to Orca Bay components. When I finish up the current Orca Bay I will be making a second one from all the components I was sent by individuals. 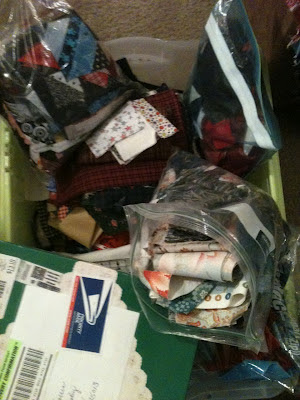 Finally here is a love quilt that was made by Quiltville yahoo group members. The individual blocks were sent to one individual who then assembled the top and passed it onto someone else for quilting and binding. All the blocks have signatures on them by their maker and there is a wonderful label on the back with Proverbs 17:17 written on it. The center block is a cute house with a dog on it. Very fitting in light of my house fire and the loss of a dog (she ran away) during that event. 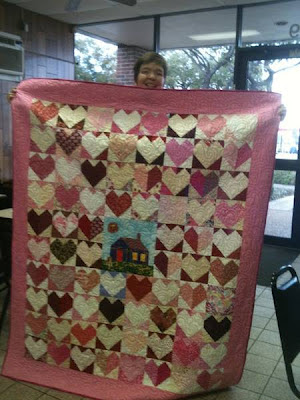 I have a great respect for people that are so giving of their things and themselves to complete strangers. These acts of kindness bring light to a sometimes very dark world. I have much to learn from these kind souls.

I made the wings to make the Orca Bay border. Now to dig up some neutrals to cut the triangles from. I am still stash challenged but remember that someone sent me a yard of PFD muslin. I dont see why that wouldn't work. Here is the center as it stands today. 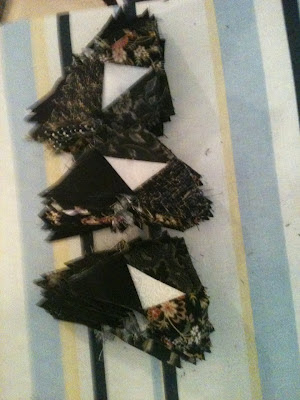 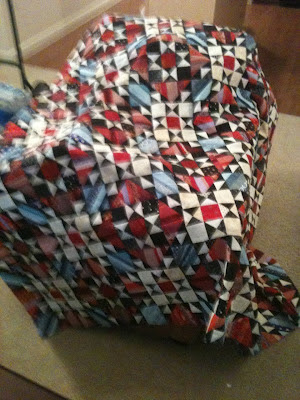 I was asked about how my blog showed up in her blogroll. Thanks to my sidekick Patrick we figured out that I can have a "title". Learn something new every day!

I only sewed for about an hour or so last night. I am putting together the rows in panels of 4 rows. This will allow me to press everything really well before I put the whole top together. I watched Krista successfully sew her rows together without pinning. I thought I'd give it a try and it went very smoothly. Thanks Krista! Saves lots of time. 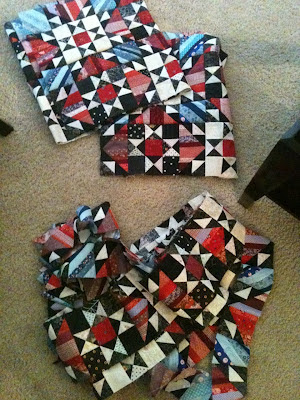 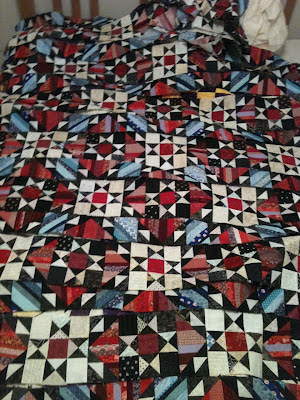 Looks like the quilting mojo may be back. Last night after tidying up the apartment from having left the teen home alone for the weekend I decided to continue sewing on OB. I had found a quick and easy way to put the Ohio Star rows together without spreading everything out so I decided to do the same for the "skinny" rows.

I looked the completed rows over that I had sewn over the weekend and got a plan in my mind and started sewing. I sewed all the blue strip pieces to the end of the "crab" units. When I started putting rows together I realized that I should have sewn the blue block on one end for half and on the other end for the other half. I guess I should have done one rows worth before sewing them all.

I got my trusty seam ripper out and picked out about half of the blocks that I had just sewn. I started assembling the rows and should be able to finish them up tonight. I can see an OB center in the near future! 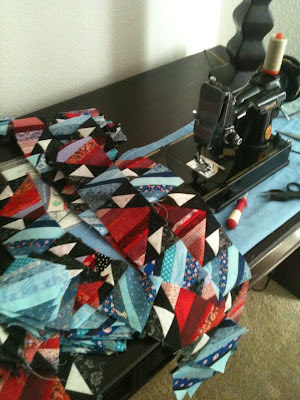 When Judy announced she would be hosting a retreat I quickly signed up since it was just a little over three hours away. Then the fire happened and I felt too overwhelmed to attend. I wrote Judy and begged off.

When she posted about the closeness of the event date I felt saddened that I would miss it and knew I would regret not attending. I just happened to read a post of a quilter that was visiting the DFW area and and asked her where she was. She responded and asked if I was going to Judy's retreat. I told her no and my reasons why and talked about it probably being full. She encouraged me to ask.

I posted a comment on Judy's post about the event and simpy asked "Are you full". I got one of the fastest responses I think I ever saw that said "No. Can you come?" We exchanged a few emails and then I thought about it and talked with my BFF about it. She simply said GO! With all the stress over how things are NOT going with the house everyone involved felt it would be good for me to get my face out of the house business for a weekend.

I called and made my room reservation. I tried to scrounge up a roommate but did not succeed. I then began my plans for attending. I was up late Thursday night doing laundry and getting things ready. When my eyes popped open at 5 a.m. I thought "Why not?". I got up. Packed the car and was on the road by 5:30 arriving just before 9.

I registered for my room and climbed the stairs to the meeting room. This was my first ever quilt retreat so I was not sure what to expect. I walked into a room full of quilters and several husbands. There were 2 to a table. I walked to the back corner and found a lone quilter. Who other than Cheryl. The lady that encouraged me to attend!

I got the lay of the land and went to the car to get my supplies. I had my Orca Bay in a box in a carry on type bag along with all my tools. I also brought my friends Featherweight. I setup and began happily sewing.

There was plenty of good food, good conversation and new friendships. I sewed the entire weekend making wings for the red strip parts and then assembling the "crabs" from Orca Bay. That is all I did for all of Friday and Saturday until about 9 or 10 p.m. that night. I managed to assemble three full rows before bed. When I got up Sunday morning I decided that I could quickly and easily assemble the Ohio Star rows and that is just what I did before packing up and heading off from the retreat. I missed show and tell as all I had were pieces at that point but I was sure to pull others over to see what I had accomplished before packing it up! 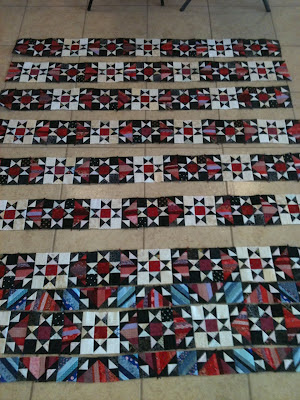 State of My Stash

I need some input. I had a house fire in January and all my sewing stuff is boxed up in my garage. I am trying to see the silver lining in this as I have been working to downsize some things and this appears to be the BIG shove to get me to accelerate the process.

I have yarn, cross stitch supplies and of course my quilting stash that the recovery company will not clean so it is left to me. Here is where I need your input. My plan is to clean all those things that I want to keep and move them into my sewing room or other storage. I was thinking I should only put things in the sewing room that I plan to make in the immediate future and then store the rest elsewhere. I live in Texas and have toyed with the idea of storing things in totes in my garage which is not air conditioned.

What experience do others have with storing fabric and yarn in a garage? Is there a compelling reason NOT to do this? What things should I take into consideration considering this stuff could be in my garage potentially for several years. Just think, I get to weigh (I am using the 4 yards per pound rule of thumb) all my stash and will have a really good idea how much I actually have. Is that a good thing or bad thing? I'll let you judge that one for yourselves.

Thanks for your ideas. 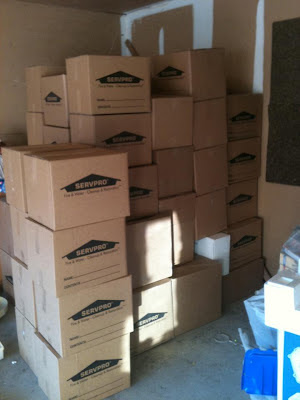 A coworker mentioned that she had received a quilt for her wedding. She told me that she had loved it to death and that it had a few loose seams. I told her that I would be happy to look at it to see if I could fix it. I imagined having to whip stitch a few places to help keep it together.

She brought it to me at the office and I opened it a little to take a peek. By all appearances it looked as though that was all it needed from the part I could see. Imagine my surprise when I opened it up to find that there were sections missing! 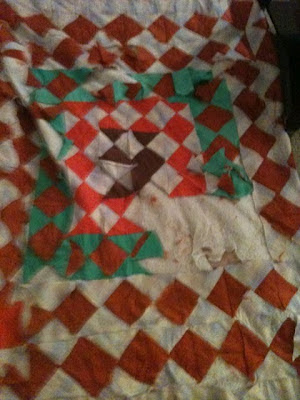 I mulled over in my mind how I was going to fix this thing. It certainly is a much larger job than I thought. I toyed with the idea of trying to whip stitch things in place. I even thought about moving sections from the edges into the center and replacing those pieces with new fabric. Then I gave myself a reality check. I knew I would not finish it if I tried to approach it in that manner.

I took pictures and showed them to my coworker. I told her it was in much worse condition than she described. I told her I wanted to remove the quilting. It is hand utility quilting. I then wanted to move patches from the edge into the center and put new pieces to replace those. She agreed to this approach. Now I will also have to quilt it again. Did I mention the backing needs repair too? It's ok. Another project to work on while I am away from my stash.