I did it!  I managed to finish all eight of my microwave bowls.  And what is even better is the 6 that I gifted are now in the recipients hands in NY.  To see what others finished click here for the ALYOF finishing party for October. 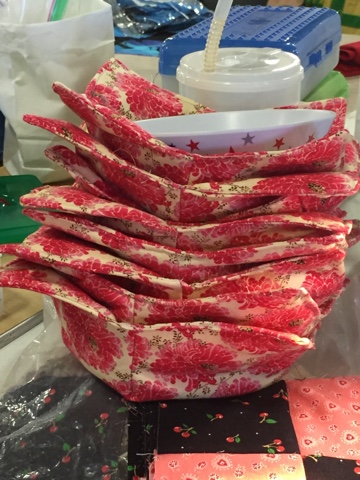 First Quilt Completed on my Avante 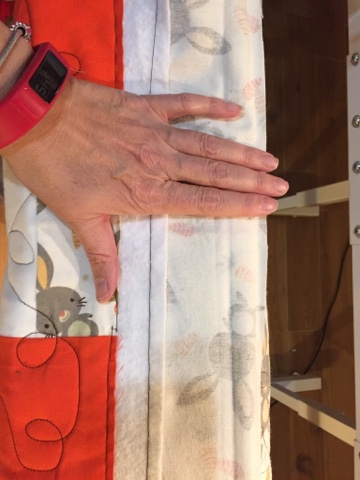 I am documenting my first experience for future reference.  I started the quilt a little late w.  When I first loaded the quilt I hit my leader and threw my machine out of wack.  It was weeks before I was able to get it fixed.  When I started again I made sure to avoid the leaders.  I went a tad overboard. 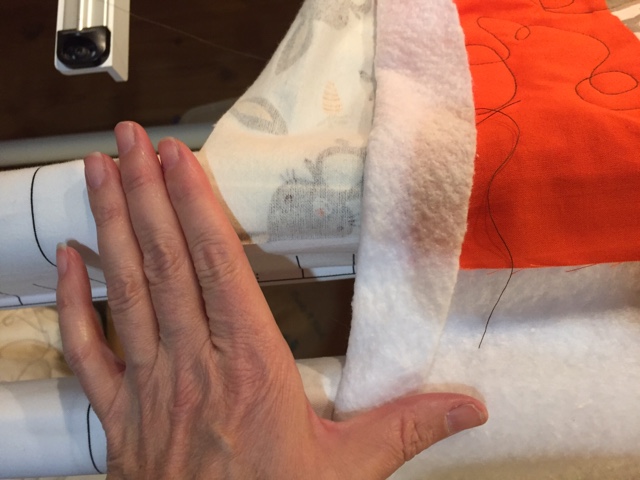 As you can see my backing was a tad short.  I will let the binder decide how to address that. 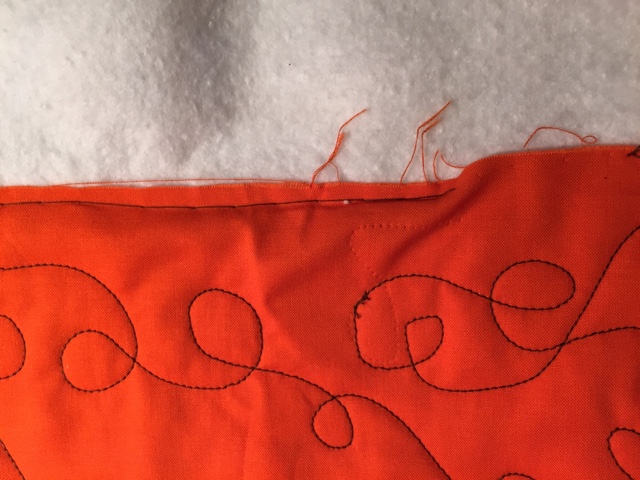 When I basted across the top and down the sides I got little folds in the edges.  I don't think I was doing something I was shown.  This will be the first question I ask.  Also, when I was pulling my bobbin thread to the top at the end of a run my thread was not getting cut so the thread was getting dragged across the back.  Again, I missed something I was taught.  Question number two. 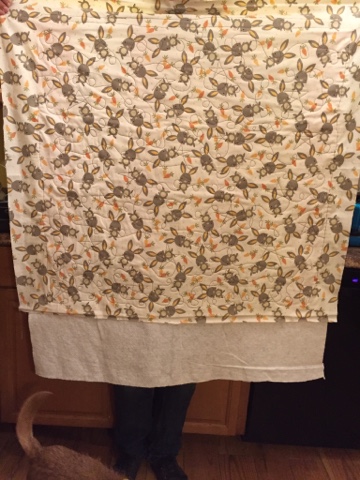 Overall the back looks good.  Tension was good. 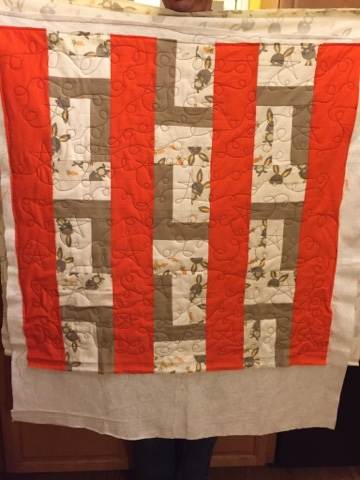 On the front there were a few tension issues but always on the right side.  I think it was my top tension, not thread but quilt tautness.  Practice is needed to improve that area I believe. 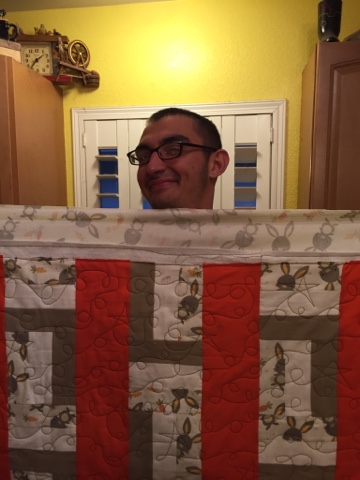 Finally, my new quilt holder in training.  He did a fine job and peeked over the top to get his photo.  He's been my sons friend since they were 7 or 8.  His name is Dylan but I call him Dill Pickle.  Didn't he do a fine job?
If you know any of my answers please feel free to share!
Hugs,
Swooze
Posted by swooze at 6:00 PM 3 comments:

I went to a quilt retreat this past weekend that started mid day Friday through midday Sunday.  The food, facilities and people were great!  I went with a group of 6 that I knew and met some new friends that I look forward to seeing again. 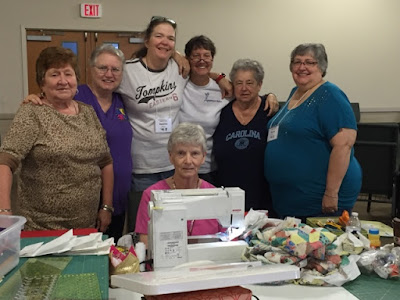 I took nine projects with me.  2 that I did not touch at all except to carry into the center and then out again when we left.  1 gave away as I discussed in a previous post.  1 I totally finished which was my microwave bowls and then 5 that I did something with even if it was to take out all the piece parts and sort out where I was (only 1 prokject like that).  I was pretty pleased with my progress.

Tumblers cut with GO Cutter and some sewing done. 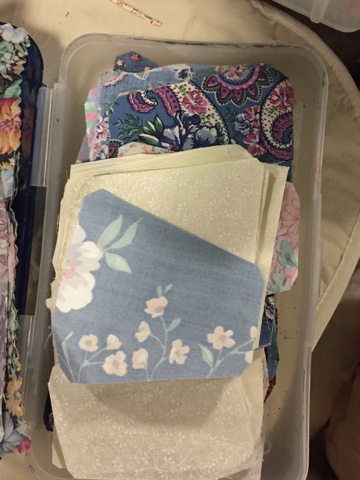 4 patches made with some gifted 3.5" squares. 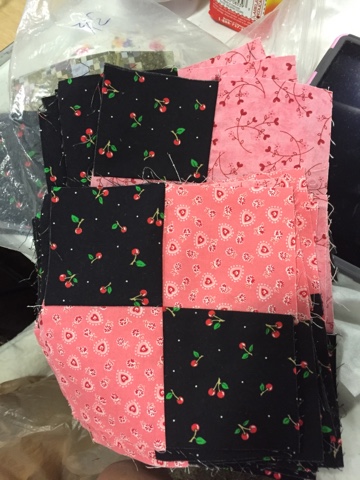 I went to a quilting retreat in Wichita Falls over the weekend.  My friend overheard a young lady complaining that she was bored.  She mentioned it to me.  A short while later I saw this trio at the cutting table.  The girl was there with her mother and grandmother.  You could tell she was not happy.  I leaned over to  Grandma and said I hear that someone was bored while keeping my eyes on the girl.  The girl didn't really react to my comment.  I told her I had brought a project that she might like to work on.  That it was a minion pin cushion.

She perked up when I said this.  She asked her mother if it was ok for her to work on it and her mom agreed.  She followed me to my basket of goodies and I handed over the supplies and pattern.  I even told her that if she had questions to please let me know and I could show her pictures.  She went off with her new project in hand.

A while later I went to check on her and she was happily working away on the pin cushion.  I asked if she needed anything and she did not.  Not long after she came over asking for the picture.  I took my ipad to show her and grandmother seemed to be pretty involved.  I was concerned that the project was cutting into her time too.  I listened to the exchange between them and could tell she was offering guidance only.

The next day this is what resulted.  A cute pin cushion and a happy busy girl!  Best of all they live in the same town as I do and we exchanged info so I hope to sew with them again in the future! 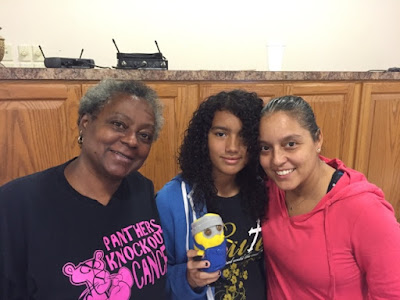 A Lovely Year of Finishes for October

I may have posted this too late but I am going to play along just the same.  I made a few of these microwave bowls In the start of 2014.  I have had quite a few cut out since then but not sewn.  I am going to get them done this month!  They are intended as thank you gifts. 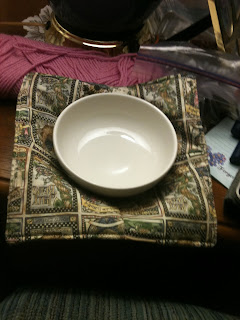 I made a second one and it cupped the bowl a lot better.  I will be using that one as my example.  Click over here to see what everyone else plans to finish this month.