I decided to arrange my dark stars with the peach so that they would go edge to edge.  I then decided to arrange the colored stars along this row.  Of course now that I have started assembling the rows I thought of another idea for arranging the colors but I don't think I will be ripping back to do the "new idea".

There is a whole stack of 3" string blocks that act as the cornerstones in the sashing.  I think I was gifted all but one that I will need.  There were 4 pink ones.  Guess where those are destined.  Then the rest are almost evenly split between yellow/orange and blue.  I am placing the blues so that they run through the peach star rows.  The yellow/orange will be sprinkled throughout the rest of the quilt.

Can you see the plan?  Pics sure show lots of mistakes I will be fixing! 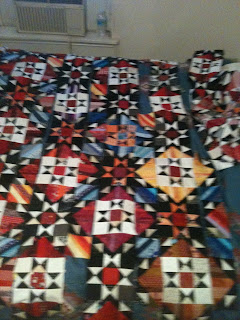 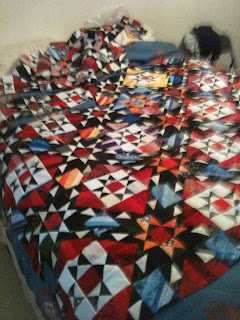 I am linking up with Judy for Design Wall Monday here.

I have a layout I am going with,  I showed pictures to a friend's grandson and he asked why I didn't put all the color in the center.  I told him I had thought about doing that.  I sewed my color blocks together so that it would be easier to move things around a little.  I have 6 separate "other" color blocks.  Yellow, purple, blue/peach, rust, maroon/batik and orange.  One epiphany I had was to layout the peach and black blocks on the diagonal and then I placed the colored stars on each side of that diagonal.  Can you see the peach going top right to bottom left through the center.

I've had fun playing with this and have sewn most of the star rows together.  I plan to continue sewing those rows together and then I can start working on the "sashing" rows.  The majority of the cornerstones are blue but I have lots of other colors too so that will be the next decision I will have to work on. 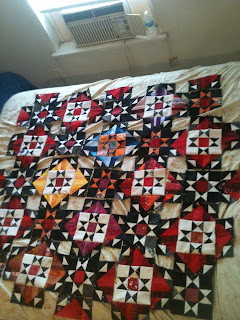 I did not finish all the wing units but I had enough to play with the layout.  I have several sets of wings that are not red.  There are blue, purple, yellow, and rust.  I scattered the color in this layout only pooling the peach stars that I received.  I had tried putting yellow with peach but it overwhelmed the peach.  Not sure the blue is much better as it lies there quietly.

I didn't feel like trying another layout at the time but am going to try pooling all the colors together.  I plan to start sewing pieces together that will allow me to have fewer parts to handle while trying different layouts.  Would love to hear your thoughts so far.  Pics below show two of the color spots close up. 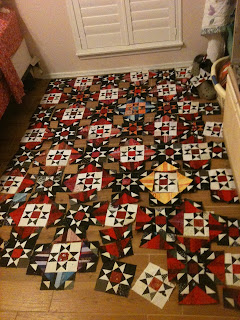 For those with eagle eyes this is the alternate layout created ny Laura that is shown here. 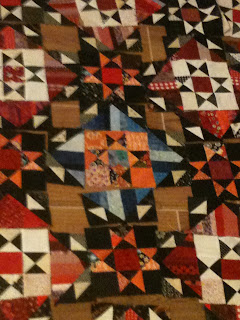 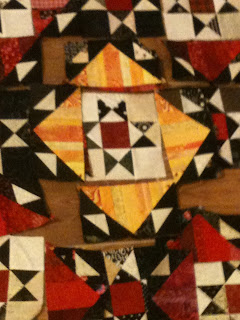 I really want to play with these on the design floor!

This is the fourth quilt I have assembled for the quiltvillehearts yahoogroup.  I was a recipient of one of their lovely quilts.  This one will be mailed off in the coming days to the quilter for the finishing touches and then sent off to the intended recipient. 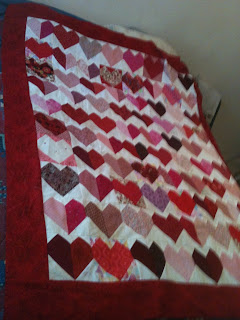 I am not sure why but I LOVE red for the borders of these quilts.  One other that I assembled had a blue Hawaaiin shirt border.  Was going for the print but rest assured if I had found a 100% cotton red Hawaaiin shirt it would have been on that quilt.   One other just did not want red no matter how hard I tried.  It got a bright pink border.  I guess I really like red huh?

When I assemble these I normally work on a row at a time.  I decided to have a little fun and sewed 80 blocks into 40 pairs into 20 quads into 10 rows of 8.  At this point the rows were attached to one another at the mid point.  I laid it out on the bed and pinned it in a few places then sat down with it and finished pinning it working with halves of the quilt at a time.  It went together quickly.  I quickly added the borders the next day since I was on a sewing high.

Friday night I sewed with the girls at the church.  I was attaching wings to the string blocks.  These units are shown in a previous post.  60 are done with 68 to go.  I have wings attached to 48 of those.  I'm working on chunks at a time rather than assembly line sewing everything at once.  I find I learn little things on the way and do a better job on subsequent blocks.  I just want to get these units done so I can LAY THEM OUT!!

This is the unit that is slowing my progress on Orca Bay.  I have sewn everything else possible, well almost, for this quilt trying to avoid this step.  My "wings" don't fit against my string block correctly.  My string units seem too large.  Many of the components were donated to me premade so I am not sure what the issue is.  I am a "close enough" sewer so I am just mushing them together the best I can.

I just finished trimming the last of the string blocks so I plan to start sewing wings onto them.  I have 70 more to go and know that I end up ripping some here and there as I don't always get my point quite right.  I'd LOVE to finish these so that I can play with the layout this weekend.  We will see.  Do you see this is just a very fancy "flying geese" unit?  Bonnie called them crabs.  See the white eyes? 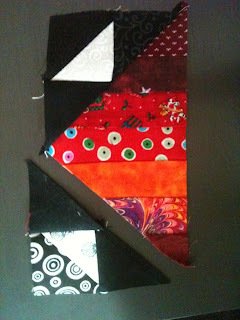 Are you making Lazy Sunday?  This is currently running in Quiltmaker magazine as a mystery.  Step 2 brought us one of the blocks completed.  I was fortunate to have taken a class from Bonnie on Nrw Year's for this quilt.  We were sworn to secrecy though.  I am checking in with others working from the magazine to make sure that I don't overshare.  I am going to pick this up again and get all the units of the curernt magazine step made so that I can keep up with the others doing this mystery and then hope to be DONE for the big reveal in September. 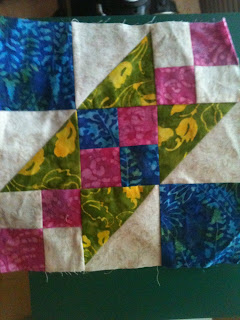 Bonnie Hunter that is.  I have two projects that she designed currently in progress.  First up is the second Orca Bay.  I finished piecing the string blocks and am trimming them to size.  Not sure how much of a fan I am of string blocks.  It isn't the string block making as much as it is how this unit is used in this quilt. More on that when I move back to that step. 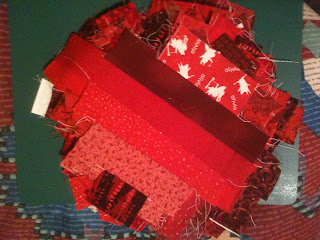 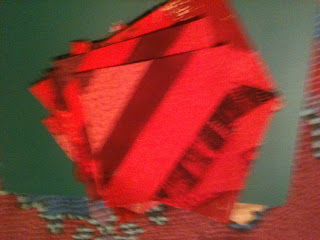 I was lucky enough to take a class with Bonnie on New Years for her mystery class which is currently running in QuiltMaker.  This is Lazy Sunday.  Here are the pictures of my step 1.  Step 2 was just published.  I am waiting for others to share their pics as I don't want to overshare.  I plan to get each step finished for this quilt between Orca Bay steps.  OB makes me frustrated as I seem to use my seam ripper a bit too much.

Are you making Lazy Sunday? 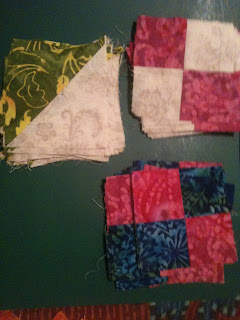