I have been looking for the "perfect" way to fold stash.  Finally accepting that doesn't exist I used Bonnie Hunter's method and have started folding.  I still have a long way to go but it will get done soon enough.  I have cubbies to the left of this cabinet and have been putting FQs there.  Third shelf down contains "kits" that I made myself.

I decided to work on a second Orca Bay that was Bonnie Hunter's Mystery from 2011.  I was gifted all the parts and ended up with enough for two.  The first is a flimsy at the moment. 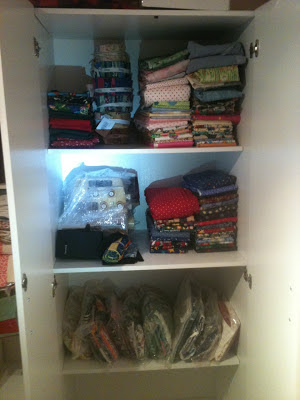 What Have I Been Up To?

Last year while I was out of my house I took a quilt from a co-worker and agreed to work on it.  She described it as having a few tears.  When I folded back a corner it did appear to have tears but just a little worse than she described.  I did not fully open the quilt and agreed to take on the job.


When I opened it fully this is what I found.  There were pieces completely missing.  At first I tried whip stitching some of the spots closed but soon realized what an enormous task this would be.  I decided to remove all the quilting and then fix the top.  I soon realized I would never finish the task.  I finally took the entire top apart down to the individual piece and squared everything up.  If you read back through my blog you will see where I built this quilt back up from square one.  Before I did all this work I made sure everything I did was ok with the owner.

Here is the final quilted object waiting for a good wash and "going over" before returning it to it's owner. 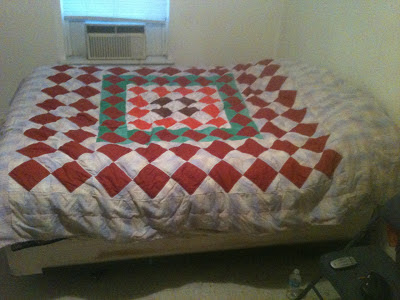