Cream and Sugar Block of the Month


So I did a thing.  Last year year a good friend of mine was arranging to teach a block of the month.  She got as far as choosing the pattern and the fabrics and then she accepted a job far, far away.  She knew I wanted to teach classes one day and asked if I wanted to take over.

The class was offered in two different color ways. One modern or brights and the other traditional or civil war.  I thought she had a tentative plan for which fabrics for which blocks thus creating an overall vision.  When I asked her for her plan she said I should create my own. 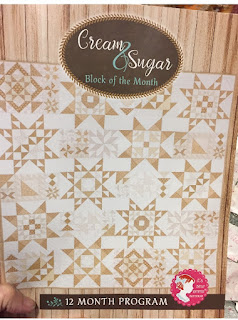 I had a sample of fabrics that had been chosen and took the pattern and copied the layout page.  I colored in various blocks with colors similar to the fabrics.  With my sketch in hand I made many trips to the quilt store and auditioned fabrics together and took pictures.  This was after using my samples at home to make basic decisions. 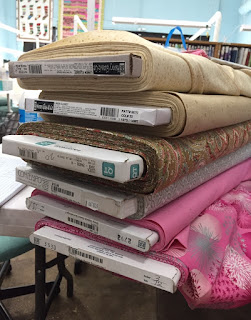 I had twenty in two separate classes.  At each meeting I taught different techniques to the class and showed my sample block.  I talked about construction tips and tricks.  People brought their completed blocks and were given the next months fabrics.  If they hadn’t completed their blocks they pay a small fee for the kit.

When the pandemic hit I helped the shop with curbside pickup of the blocks.  I think we skipped a month.  It was nice seeing everyone in their car for a private show and tell of their blocks and a quick exchange of tips.  I’ve lost three people due to either being discouraged at falling behind or becoming impatient with having to wait month after month.  Some others have fallen behind but are sticking with it.  I’m going to suggest a class to allow people to come and sew and catchup.

I have all the blocks made now.  I’ve started putting the top together and now have to wait for the rest of the blocks to be handed out to finish assembling it. 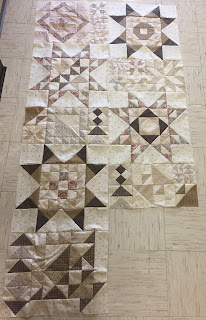 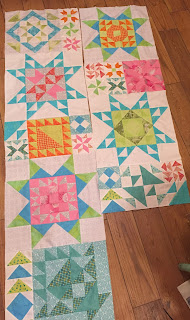 I’ve been updating my friend as I go.  I think she’s pleased with the direction I’ve taken.