I got all 6 centers completed and then started on the borders. 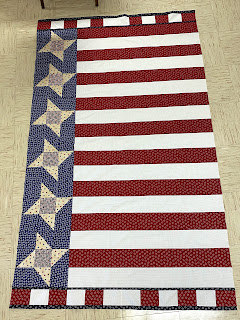 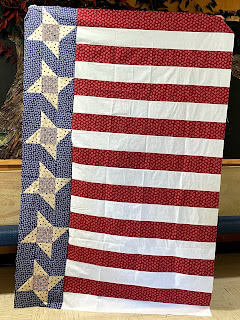 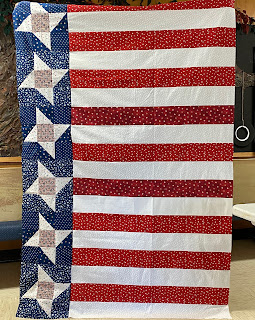 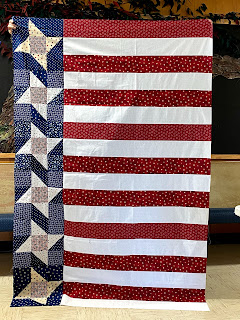 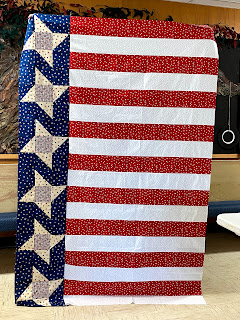 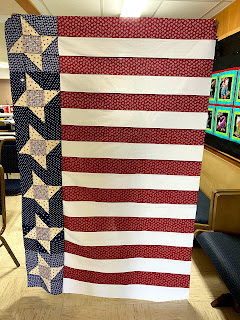 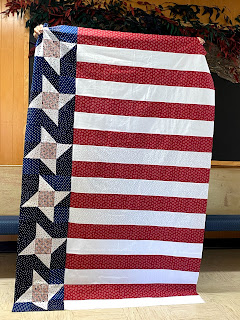 I had a friend raise a concern that the “flag” did not begin and end with a red stripe.  I’m asking around but I don’t think I’ll worry about it since it’s not intended to be a recreation.  Would love to hear from any QOV experienced folks.
I’ve met my goal for Patty’s September OMG at Elm Street Quilts.

As I said before my daughter moved out recently.  I plan to move my stash in there but first!  I had been thinking about hiring someone to come in and patch up some holes and gouges in my walls.  When she vacated the room I texted a friend and asked if he could do the job.  He responded “yes, and very well.”
I wanted to make it worth the trip so I looked around and came up with a list for him.  I even added a thing or two to make his trip worth it.  I even invited him to stay over and eat my cooking!
He painted my hall bath.  I just wanted a change so tried for a grey with a blue cast to it.  In the photos it looks exactly like that but it’s actually a light blue.  I cannot choose paint to save my life.  This is my third big paint job fail.  Note to self, get a test pot!  It’s not that I dislike it it’s just not what I was going for. 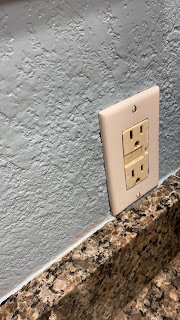 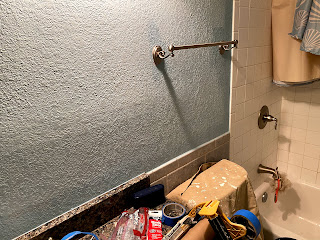 Like a home improvement supplier once told me, it’s better than what was in there before!  Our friend did a few other repairs in the hall bath as well.
In my kids rooms he patched and touched up the paint.  My son had a hole in his ceiling from an installation gone wrong.  He did the same in my bedroom.  In my living room there were some cracks from our slab foundation shifting which he taped, repaired and painted.  Finally the foyer had a settling problem as well but here he had to add trim to cover the gap in the ceiling and wall join. 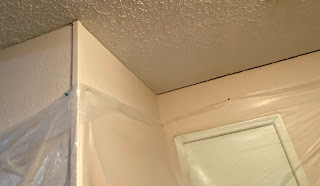 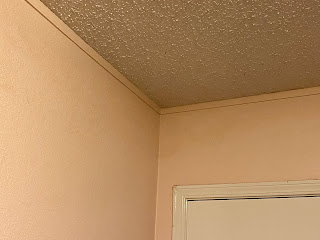 A definite improvement!
He and my boyfriend are working to install a light above the shower in the master bath now.  Another add on but an addition I would have like to have in the 30 some years since living in the house. 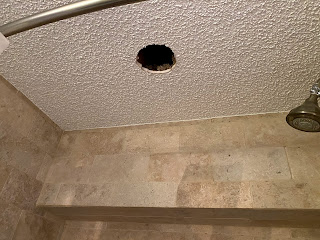 We will get everything put together over the next day or two.  Then the big stash migration will begin!
Do you have any home improvements you’d like to make?
Happy quilting!

I’m working on my OMG for September.  The pattern is Olde Glory by Donna Robertson from Fabric Cafe.  I bought a 3 yard quilt kit from her because I liked the pattern so much.  In addition I had been collecting red, white and blue fabrics for Quilts of Valor (QOV).  I don’t exactly recall how I came to the decision I did.  I am pretty prolific at making the quilt tops but not so much quilting and binding them also known as finishing them.  But I decided to make QOVs for people I know to help the finishing part.  I am starting with my cousins.  I posted a comment on FB and asked who of my cousins had served.  It was just a general question and I got the responses I needed.  There are six of them.
Armed with the above I took the pattern and started tweaking it to get to a 60x80 size.  I was fortunate in that increasing all the pattern pieces by 33% got me very close to where I needed to be.  I have to add 8” of something to the length.  My go to is checkerboards.  I knew I was going to have extra from my strip sets that would be cut off.  I thought I’d be able to get enough for the top and bottom that serendipitously was the right width to achieve my 8” goal.
Yesterday was another sew day at the church.  My goal was to 1) press all six strip sets 2) trim them to length 3) sew the star strip for the sides 4) pair the stars and stripe sets.  I have learned to start with one when there’s an assembly line.  This way you can work through any kinks in your plan.  I did.  My trimmings were not going to yield the additional 8” I needed.  I was able to get 7”.  To the drawing board we go! 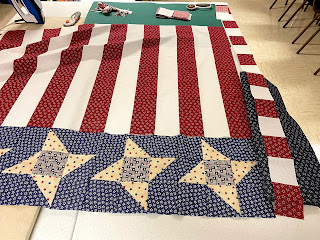 I decided to use a coping strip of navy to round out the extra length.  In doing this I can break up the bottom white strip from the white border.  When I select borders I try NOT to put the same colors against each other thereby keeping a straight line visually.  If you look at the picture of the pattern they use a white border against the white piecing.  I guess it’s just one of my peccadillos. 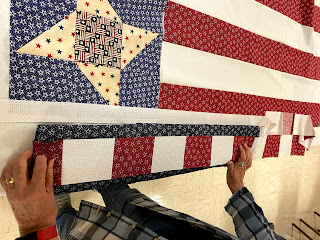 My current plan is to add a blue border at the top and bottom, add the alternating squares of red and white then add a narrow white border and then a wide border of the navy to bring it up to size.  Let me know if you have other thoughts or ideas.  In the meantime I’ll be attaching the stars to the strip sets.  Note that this is not completely laid out like the pictures.  It was just to give me a visual to work with.
.

I managed to get all my strip sets done for my 6 Quilts. Have to press and trim to size next. 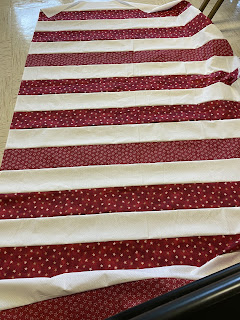 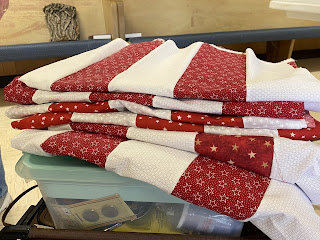 Now onto the stars!
How did you spend your day?

I haven’t participated in OMG in a long time.  Thought I’d give it a go this month to try to get me back into the swing of sewing at home in addition to my outings with my friend.
I started making these stars back in June.  Yesterday I started the strata for the quilt these go into.  I’m making 6 of them for cousins that have served in the military.  A QOV. 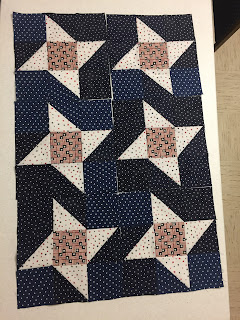 My goal this month is to get the centers of all 6 quilts done.  This will not include the borders but if I do then bonus!  Linking up with Patty at Elm Street Quilts One Monthly Goal.  Did you join in?

Over 3 years ago my daughter moved out into her own place.  I remember her asking me to sit down (so that she could break the news to me) and told me of her plans.  I think I might have asked if I could help her pack.  Not the response she expected!  I quickly moved in and her room became my stash repository.  It was never really organized but helped contain the mess behind closed doors in addition to allowing me more elbow room in my sewing room.
And is the case all good things must come to an end.  Some months later she was back and with almost no notice.  Let’s say that in her absence I may have grown into that room a little.  I was forced to empty that room on short notice.  It was not going to fit into my sewing room although some did go back in there.  The majority of it moved into my living room and has been strategically placed behind my recliners in totes.  Stacks and stacks.  It has been a big source of struggle and I’ve drawn plenty of criticism over the mess.  I happily pointed out to my grown children that they could move out at any time and I’d have plenty of space!  People quiet down when you challenge them.  All this to say that my daughter is moving out again.  I told her she can’t come back.  At least not on a whim.  She needs to really figure out how to launch and stay launched.  To grow up for real!
So I’ll be reclaiming my stash room.  I’m trying to plan it better so that I don’t have a mess.  I’ve started sorting through some of my treasure to get ideas of how best to sort and store.  I do know I have to sew faster and buy little else!  I have things I’ve kitted up.  Those make sense to go to my sewing room.  I haven’t gotten much further than that.  I have a wire rack in the room already.  I bought three more, one of which will remain in my sewing room.  The other two will need to move to my stash room.  A friend moved last year.  She gave me several totes that are perfect to hold quilt tops and backings.  I’m thinking about doing just that and storing under my long arm.
What else?  Help me think through this please.  I’ll be trying to work through this all with a gimpy leg.   One help if you want!