This is what is on my design wall.  I had been gifted lots of extra hour glass blocks and parts.  I think I had 187 of them to start.  I decided to look for something to do with them and happened to have Bonnie Hunter's latest book in my hand.  I landed on Pfeffernuse.  The onlly issue is my hour glass blocks are 2.5" and the pattern calls for 3.5".  I am going to make the quilt using these and just make a lap/throw size.  I am also going to lengthen it so I will need 336 total.  I have more made and need an additional 100 with pieces made for about half of those. 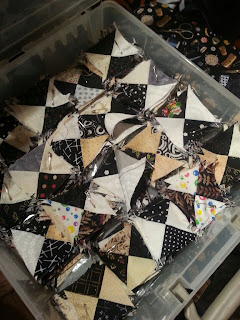 On July 6th I completed my second Orca Bay top.  Shown here is the first one completed over a year ago. 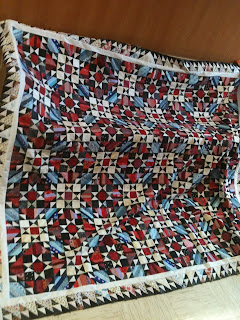 Here is the second one just completed. 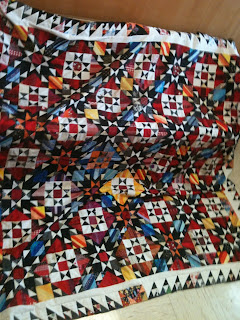 Here they are side by side.  If you really study them you will see that I used an alternate layout for #2.  The red triangles with wings are accentuating the white block in the second one making the black color more saturated.  Also, all the color really makes the black pop too. 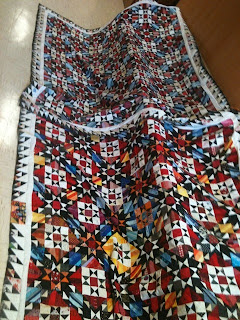 Head on over to Judy L's to see what is on everyone else's design wall.

I had a play date Sunday!  I was invited to go to Laurie's to play on her longarm.  I brought tops, backings and batting to play.  We decided Laurie would go first as the first top is intended for Renee's grandson and we wanted it done right.  We then decided Renee would go second and I third. 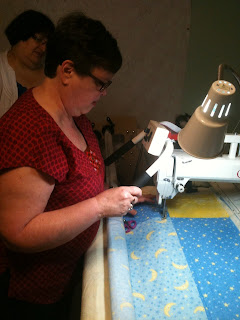 We watched Laurie work her magic and got our hands in there a little too to try and learn for our turn.  Half way through, the thread started breaking and ultimatly we could hear the machine sliding and stitches were not forming.  Laurie nursed the machine through the first top and then we loaded the second hoping it would go more smoothly.  If did not.  But all was not lost.

While Laurie fiddled I rifled through her project boxes, her stash, her bags of stuff here there and everywhere.  Renne and Laurie couldn't help but laugh at me.  I found Laurie's Orca Bay in progress and corrected a few Ohio stars with Renee's help.  That involved a seam ripper and my playing on Laurie's Janome 6600.

Once the two errant blcoks were repaired I then pawed through the other projects to see if there was something else Laurie needed help on.  I didn't sew anything else for her but moved to her stash and looked that over then found the pile of orphan blocks.  Those were fun to look at!  She has some nice little projects in there I think.

What captured my attention for the remainder of the date was a bag of scraps she had under her longarm that needed to be sorted and pressed.  Renee sorted out the too small for pet beds and I pressed the rest.  We saved selvedges in a separate pile.  They were Japanese prints in turqouise, red, white and grey.  Oh I wanted to play in those.  Alas, Laurie had her own plan and they stayed with her. 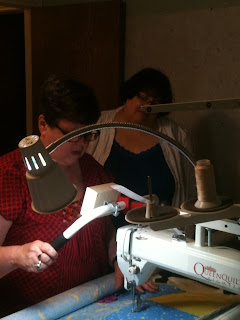 Here is the first top all quilted.  I will add a binding and send it off to Renee's grandson Porter. 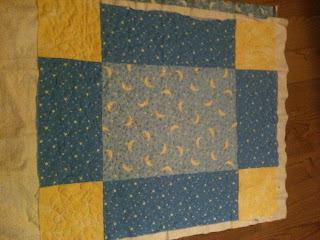 The pattern is McCall's super size 9 patch. You just take 3 yards of fabric and cut them all the same way and shuffle the pieces then sew back together again. Just need 1 yard of fabric for each backing. Super easy and fast! I remember making these and laboring over the cuts needing to be "right". If I make these again they'll just all be cut the same without so much worry about exactness. Who will know?

Here is a close up of the loops, stars and moons.﻿ 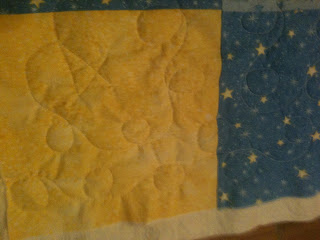 I hapened upon this kit while nosing about in Laurie's sewing room.  My eyes must have been extra sparkly as she offered it to me and I happily accepted.  This was donated to her guild.  I will make the top and return it to her for their charity that makes quilts for hospice.  Just a quick fun project! 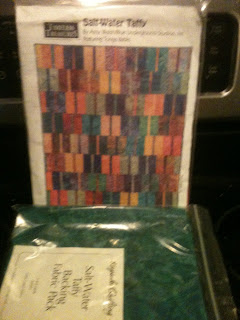 We had a great time and agreed that we needed to do it again.  Laurie kept the other two tops and agreed to quilt them for me.  At this point they are destined for Project Linus.

Posted by swooze at 2:30 PM No comments:

Here is the promised tour.  I am taking these on my iPhone so the quality isn't the best.


When you step into the room to the right is my bookshelf.  I have most of my quilting books on here and have to finish putting the rest up.  The bottom shelf holds paper patterns in pattern boxes.  There are several plastic bins with notions in them that will be moved elsewhere.  Down below are my quilting magazines.  On the floor is assorted stuff that I need to find a home for.  More than likely I will be stacking my project boxes near here.  I plan to limit the number of boxes to 6 or under.  I am a fan of FAB 4 that I have talked about on here before so 4 may be the magic number.  It dawns on me that this might be the right place for my tote of "kits". 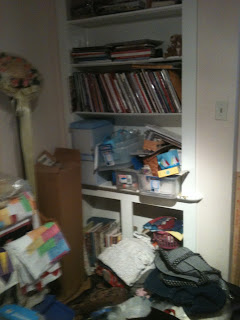 On the wall to the right I have my quilt rack.  I have two types of tops here.  Those that are completed and waiting for quilting and those that need more work.  Those "in progress" as they all are really in progress are on the front where they can easily be seen.  The tote underneath contains my kits that I mentioned previously.  To the left of that is a bin that contains fabric and scraps.  I need to sort, fold and put away the fabric in my stash cabinets and put the scraps in the scrap bucket.
My design wall will eventually go up here. 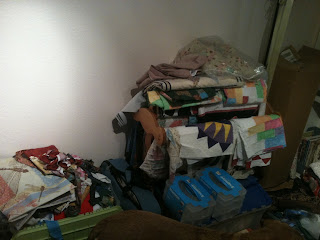 The wall you see as you enter the door is the where the stash cabinets are located.  I had the guys slide everything to the right a little so the wire racks could be put along side the cabinet on the left.  This made a good spot to keep my rulers as well.  I plan to store all my sewing notions in these racks. 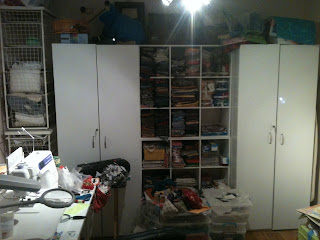 This is the wall to the left as you come in the door. The location of the machine. I have it sitting on a drafting table which works well for me. You can't see it but tucked behind the door to the left is my cutting table. I moved it there to make it more easily accessible. It used to live where the wire racks are now kept. 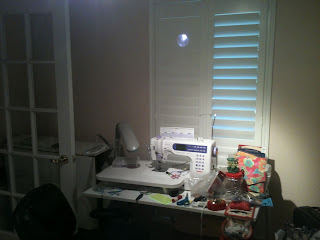 What sewing room would be complete without a sewing assistant? This is Sadie, She is my son's dog and whenever I go in to sew she is right there. Making her a mat to lie on is in order. 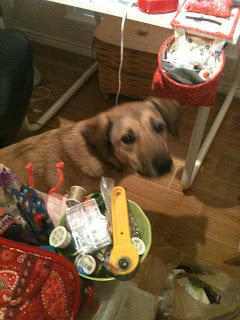 This is a little stack of QSTs that I just finished sewing into hour glass blocks. These were gifted to me and I have plans of making a version of Bonnie Hunter's Pfefferneuse quilt. I am trying to decide what color pinwheels to put with them. Watch this space for more news! 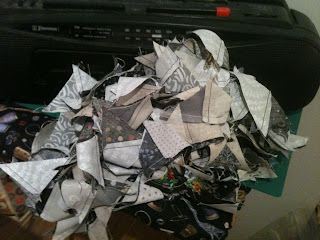 Can You Sew Something For Me?


Do those words strike fear in your heart?  They should mine but I like to "help".

So the neighbor asked...can you sew something for me?  I asked what he needed sewn.  He showed me these truck visors and told me when he needed them by.  I said I would try.  Of course the boyfriend is sitting there saying "Sure she can do it.  She can sew anything".  Sigh...

So I took ONE of these visors and stripped it.  The sun eaten fabric had been sewn to a thin piece of cardboard and then placed over a wooden piece on a metal rod.  You can see the metal piece that attaches it to the vehicle at the bottom of the picture.

For the cardboard I decided to use PELTEX 71 which is very stiff and fusible on one side.  The guys decided they needed to be vinyl.  I checked it out and it wasn't too expensive so bought some.

I took the fabric that I removed from the visor and made a pattern on the PELTEX.  I cut it out then folded it in half and trimmed it to be sure everything lined up.  I then cut the vinyl about 1 inch larger than the fusible.  I fused it to the PELTEX.  The vinyl held up well to the steam press cloth.  I then tried to fold the edges over and glue it to the fusible on the other side.  I think elmers glue and more time would have worked as the glue stick did not.  I folded the piece in half then folded the fabric edges in.  Smoothed it all out.   Used my binding clips and clipped it all around.  I ultimately sewed the piece like a sleeve up to the end near the mounting piece and then slipped it over the wood.  I adjusted everything and sewed it close as best I could.

I had boyfriend deliver the first one hoping the neighbor would say forget it.  I don't like it.  Stop.  I continued working on the second one just in case.  When I didn't get a phone call and the bf didn't come back I knew I had to finish the second.  Same procedure.  Much better the second time.  I walked it down to the neighbor and was greeted by him yelling from the garage how awesome the first visor was.  The first was already installed in the truck.  I handed him the second and he went right to work putting it in. 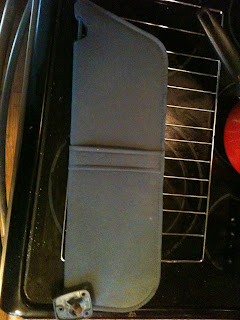 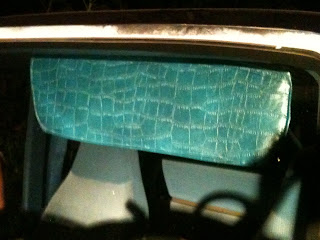 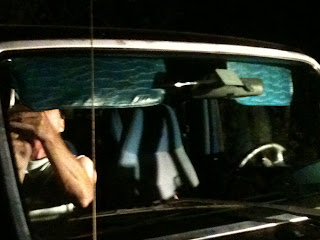 I like the alligator look.  It adds some fun.  The truck belongs to the neighbors Dad.  I think he'll get a kick out of it.

On the quilt front.  I finished my Feedsack Patches to the top/flimsy stage. 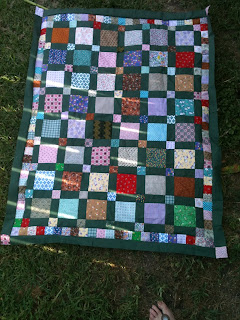 Lori in Ohio mentioned on Quiltvillechat yahoo group that she had "some" extra Orca Bay pieces.  I quickly emailed her and asked if she had any extra wings.  She said she had some and would send them to me.  A few days later I had at least 150 of them in the mail.  The wings are the little black and white pieces shown below on one half of the HST.  I cut out some white for the other side and sewed them up.  I have begun sewing them together to build my outer border for my Rainbow Orca Bay.  I have sit and sew Friday so will be cutting the inner border there where I can spread out.  I will then layout the outer border.  There are some border pieces that are in another colorway so I will lay that out to see how I want to piece those in.  I plan to have a finished top by the end of the weekend! 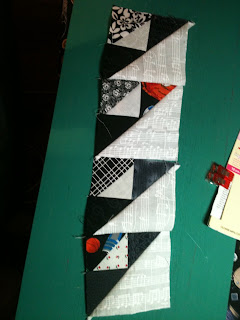 What quilty things are you working on?