I thought it had been two weeks since my last post but I see it’s been just over a week.    I haven’t sewn much since last week because I have been organizing and searching for the missing project!  It was driving my insane looking for it.  Friday night I finally told myself I was going back into my sewing room and open every single box, bag and tote and look again.  I was on the phone with a friend and decided to search while visiting with her because our quick chats usually go for 1-2 hours.  I thought it would be a good task to undertake while on the phone.
I went to the corner where I suspected it might be and started by folding loose tote bags, peering into small totes of fabric even though I knew what was in them.  I had one lidless tote that had a stack of books and magazines on top of it.  I slid it out of the way and kept looking through things. Luckily I caught myself and said you need to look IN that tote.  I lifted the stack and set it aside.  I felt disappointed when I saw a pattern on top.  I decided to put it away since I had a defined spot to put it.
To my amazement there was the missing project!  Tears welled up in my eyes.  I was so relieved and thankful to have found it.  I pulled out the bag and looked everything over to make sure it was complete.  Everything was there.  Yeah!  I decided Saturday (now yesterday) I was going to devote my attention to that project.
The day started out and I decided to add the next border to my Peaches and Dreams.  The previous week I had cut three borders and only added one.  My heart was just not in it as my mind was on the lost project.  After I added the next I decided to add one more.  When that was on I decided to assemble the rows of my pieced borders then of course I had to attach them.  That was all I had prepped.  My day was done.  Here is how far I got.  I have to cut the two remaining borders to attach.

Before I left I layout the blocks from the project I need to assemble.  Shown here are nine blocks.  There is a bag of hankies that will be added in.  Here are the pics.  Open to ideas for how to use the hankies.  Some thoughts are butterfly blocks, or skirts of the ladies or use them as a block in some way. 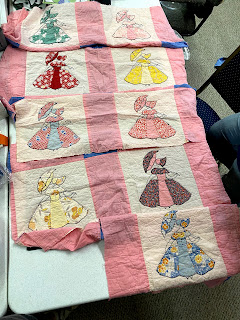 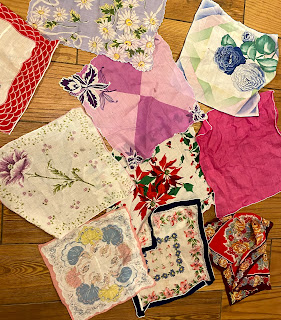 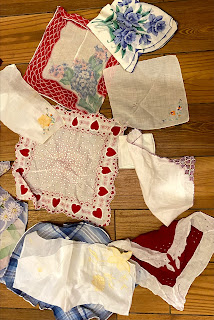 I am so glad you found the missing project. What a relief!

HI Swooze! I really love your peaches and dreams quilt...perfect!!!

I know that feeling. I thought I had lost one too once and it broke my heart. When I found it again, it was like find my child in the midst of a crowd. So happy for you. It is such a great quilt. Enjoy finishing it. ;^)

I'm not usually an orange person but that peach is so pretty! Love the crinoline ladies. There was a great project recently on a UK quilting site I believe, where she had folded vintage hankies into little 3-D dresses and hung them on a washing line, really cute. She said if you search on 'origami dresses' you will find tutorials online on how to fold these in paper. She starched the hankies I believe then folded them.

Oh wow!!! that found project is going to be amazing - look at all those amazing things ;-)
And your peaches and dreams is beautiful!

so glad you found your missing project....i love the peaches quilt border!