About the time I finished up the last two churndashes I decided to use up the red and white fabric that I had to make another quilt. My friend is in the process of making the Oh My Gosh quilt and I thought I would like to make a shoofly block. Normally I don’t follow along with sew alongs because I have a list of things I’d like to finish myself. But I got the idea to make a chain quilt because that’s what stashbusters had done last year.  Part of this decision was because Pat from stashbusters commented that she tries to use up fabric and not put it away in her stash and I thought that was a great idea.
I made the chain blocks and shoofly blocks and laid them out. I was not really thrilled with how they looked. I think that is because the scale of my chain blocks were too large for the rest of the quilt. To me it just looked like a lump of busyness all slapped together. 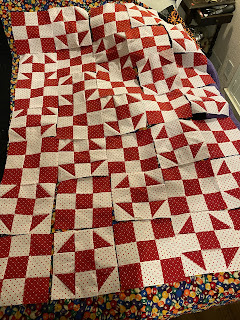 My solution was to add blue solid blocks between the other blacks to break up the busyness. I will have to try another chain layout sometime in the future and pay attention to the scale of the chain. 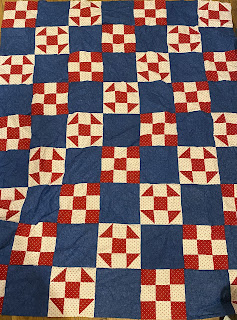 After making this quilt I was tired of working with the red and white fabric and put it away. I declared that I was cured of saying the phrase “I’ll take the rest of the bolt”.  I will assure you I am not cured as I have had several end of bolt purchases since stating that. I did move onto a new category of fabrics to try and bust and I will post about that next.
During many of these discussions other topics came up such as minimalism and organization. Someone mentioned the YouTube videos made by a group called The Minimalists. I watched one of them and they gave you 10 suggestions of things to work on and the one that really caught my attention was putting away your toys.  It’s suggested that you put your toys away every night before going to bed. I thought what a great way to describe all of my quilt goodness that was all over my house.
I haven’t really started to put things away but I have continue to work on organizing my home. I came up with a plan for getting all the fabric refolded and put away in neater fashion.  I now have a table that I can use for the folding but I’m getting ready to go on vacation so I will not start on that process just yet. I have three volunteers it will be coming over to help me with a folding and putting away. I hope while we’re doing that I’ll be able to divest myself of some things.
More to come!

Hey swooze.....I do like the red and white and maybe it would look different from a distance but I do like the blue you added...... You can see the blocks better.......
Goodluck organising your stuff.......I would like to be a little more minimalist but really they are also boring........ So I need to reduce and organise a bit more but that's it........ We just need more hours in the day.......

oh yes using the blue is spot on! and i put everything away before vacation and just now resurrecting my useful things to start up sewing...problem is i don't want to see the clutter around...but can't have both...enjoy your time away!

The addition of the blue blocks does make the others really "pop".

Yes I do like that you added the blue to your Churn Dash.