I finished my goal.
Repaired the top.  Quilted it and bound it.  I have learned the best way (easiest)  to fix these things is to take it apart.  I again used some vintage fabric to make the replacement patches and sewed it back together.  When it was given to me to repair there were just two long lines of quilting going top to bottom long ways.  The patches were free to shift and shift until they either wore away or parts just fell apart.  I quilted every single seam.  That patchwork isn’t going anywhere!  No batting and a thick ticking like back.  I just reused that as it was in great shape. 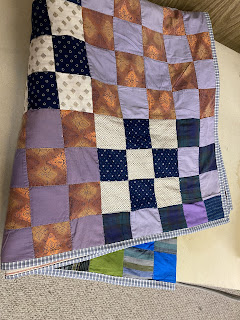 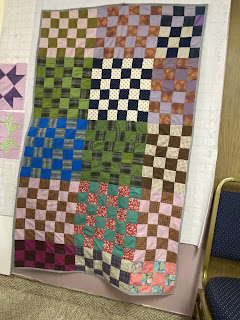 When I returned it to my client it was a strange experience.  We are friends and he met me at a mutual friends house.  He stepped outside and greeted me and I handed him the quilt. I expected him to open it up and admire it or take it inside to show the others but instead he said thank you and took out to his car.   I said I hope you like it and he responded I’m sure I will. We went inside and there was really no further discussion of it with our other friends so I wondered if he would be happy.  I’m not sure what happened but the topic of the quilt came up again.  He mentioned that his was probably the only one still in existence.  I think that was his way of demonstrating his happiness.  I had asked for a small amount given we are friends.  He ended up giving mr more than I asked.  Maybe that was my another sign of his pleasure.
A few weeks ago I went to a retreat.  I wore a t-shirt I bought at Walmart.  Bonus points to those that know who it is.  I wore it our last night there and Lo and behold, here comes Marilyn Monroe.  We had someone celebrating a birthday so she sang Happy Birthdayto her. 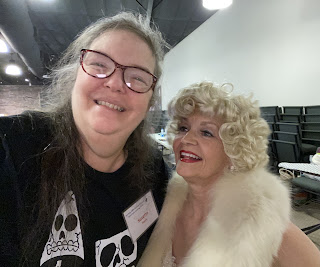 I’m not sure why I acted like such a fan girl.  It was just fun!
Linking up with Patty at Elm Street Quilts for One Monthly Goal!

You put in a lot of hard work on that quilt and probably worried about every decision you made. Fixing a quilt for someone is a lot of stress! I think we mentally put ourselves thru the wringer doing projects like this and the quilt owners have no idea that we just need a little love when we return them.