The commissioned quilts arrived in time for Christmas.  I’m awaiting pictures with their recipients.
I started quilting on my quilt.  I have a plan and sort of quilted myself into a corner of sorts.  I started with rulers and they’re a little too restrictive for the space.  I’ll do the rest free hand but am having a bit of a pouting session first.
In the meantime I’ve been piecing.  First I made Pokémon pillowcases for my son.  They were a cute print I found at Hobby Lobby. 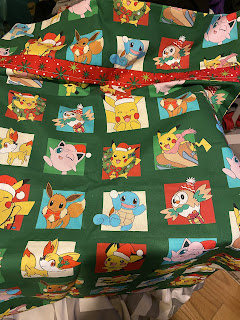 Then I made a kitchen set for my daughter consisting of four owl cozies and three hot pads custom sized to her pans.  They are made of a cute gnome fabric also found at Hobby Lobby.  I added decorative stitches to the smallest hot pad.  On the last side it got hung up and it kept stitching on itself.  That was a mess to pick out.  I just removed the bad and redid that spot.  The others got simple straight stitching! 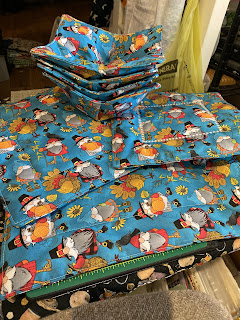 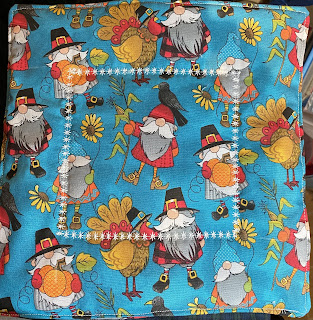 Right before the New Year a friend of mine gave me 24 blocks from a swap we had participated in.  Each person chose their own fabrics and pattern.  Each person was to make two blocks then pass the box to the next person until the box was returned tothe owner.  The book of patterns they chose had terrible instructions.  Peoples sewing abilities were sub par.  The boxes did not get passed correctly.  I never got my friends box and didn’t make any of the 24 blocks.  When she got her blocks back they ranged in size from 11.75” to 14”.  She was so disappointed.  I took the wrong ones apart for her and did some fixes.  She just couldn’t get past the fiasco and gifted the blocks and leftover fabric to me.  I told her I would finish the quilt and she resisted my offer.  A few weeks ago I went to work and fixed one last block.  Then I made 11 more.  This was after a back and forth trying to determine the size she wanted with her still resisting.  I took the completed center, shown below, to her to audition on her bed and audition borders.  Saturday the decision was made and I got the first border on.  Will get the second one on this week. While working on the above and waiting for decisions I pulled out my scrappy red plaid double Ninepatch and continued piecing.  I need 150 of the small 9 patches which will make up 30 double ninepatch blocks.  The blocks will be set on point.   .I had a little cutting to do to have what I need for the small 9 patches.  I also have more sub cutting to do.  I hope to have it to top stage by the weekend. 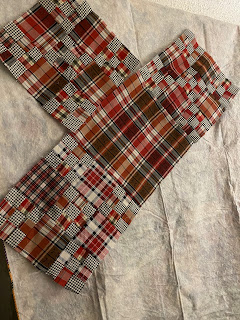 I have had that issue with getting blocks that are supposed to be the same size but are not. Then the quality of how the blocks were sew together by different people - well, it's a challenge! I think your friend is resisting because she knows how much work it is to make sense out of the mess. The red plaid double nine patch - is that flannel? I like the way it is turning out so far. I am intrigued with the decluttering challenge. Does that mean you get rid of 168.5 items a month? How did you come up with that number? I need more info! LOL!!

Sometimes exchanges are not the fun they should be.
You have been busy though and saved the day.
Have fun with your other challenges.

good luck with your challenge and decluttering...lots of sewing for other people with very nice results