I went to church to sew on Saturday.  I really intended to get a lot of sewing done.  A lot!
But first, I had taken two kits, one for me and one for Linda, that I thought we could whip up in an hour or two.  Let me say “The road to hell is paved with good intentions.”.  I knew we could not complete them as we needed walnut shells and I couldn’t put my hand on them before leaving the house.
I carefully read the instructions, then I read them again and again.  They were not overly complex they were just not written very clearly.  The kit was for a “proper upper”.  It’s a gadget that can support your phone or tablet.  It can also act as a pincushion, an eyeglass rest.  There are optional tabs that you can slip your scissors through or other accessories.  Before I read that was their intended use I thought they were to clip wonder clips to.  I opted to not add them to mine.
I cut the first one from the fusible and realized there was enough to make two.  I decided I’d make them both for myself.  One for home and one for away.  I went to press the fusible to the fabric.  The iron was too hot and melted the paper layer causing fusible to stick to the iron.  It also warped the sewing lines so they were not straight nor were the corners square.  No big deal.  I drew new lines with a pencil.
Before folding it in half to form a pouch I had to sew two registration marks.  I read and read instructions again.  Sewed the lines, folded the pouch in half and consulted the instructions again.  I sewed the lines I was directed to and back to the instructions.  Had to make a fold and sew another seam.  Finally, I was able to turn the pouch.  Then I had to top stitch on the registration marks.  I quickly sewed the second one to that point with no consultation of the instructions.  Yeah!  The picture below shows after the pellets were added to the top part before hand sewing it closed.
. 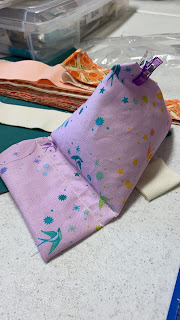 So now I’m waiting for Linda to sew hers.  I showed her where I got tripped up and what to avoid.  She decided to make the tabs.  She got those made and pinned to the sack.  I explained to her what lines to sew.  She sewed what she understood, turned the pouch and her tabs were on the inside.  She sewed her second one correctly, turned it, top stitched it and had forgotten to fold the pouch and sew the final inside seam.  You know we we’re rolling with laughter by now.  I suggested she just turn under part of it and top stitch instead of picking it all apart.
After all the reverse sewing she had her two pieces sewn.  I had brought poly pellets to put inside.  We ended up only having enough for three.  I have to find the bag I have here somewhere.  We have two hand sewn with the top part complete.  I took the walnut shells back today but we ran out of time.
We did have extra help pouring the pellets.  It took one to hold and the other to pour.  Someone else got in on the act. 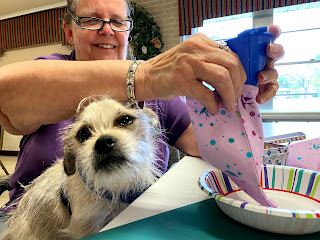 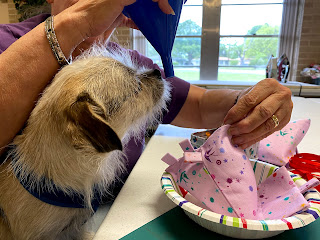 He really wanted to taste those pellets!  Can’t wait to see how much help he is with the shells!
So while Linda was on her adventure I continued cutting for one of my animal print quilts.  Needed a background. 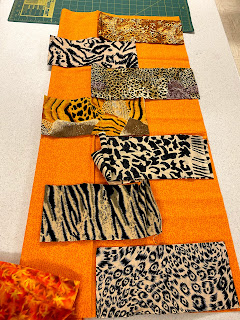 Then I continued cutting for my Peaches and Dreams.  I cut the centers for all the blocks except one type.  I decided to work on one block type at a time.  I chose the block and continued cutting.  I quit cutting and finished the proper uppers to the point of needing the shells.
I hadn’t intended to go back and sew today but I did.  I got 18 of the 24 blocks needed sewn for Peaches and Dreams.  The last six will go quickly, then I’ll have more cutting to do. 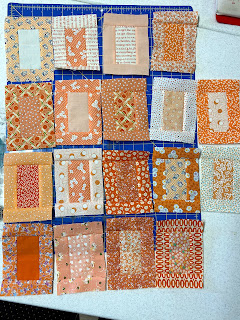 I had also pulled 4 FQ bundles that had 5 each.  From yesterday to today I mulled over the possibilities, selected the pattern and did some math.  Today I pulled 12 and cut 2.5” strips for my chosen pattern.  Another kit!
The chosen and the monochromatic version to check contrast. 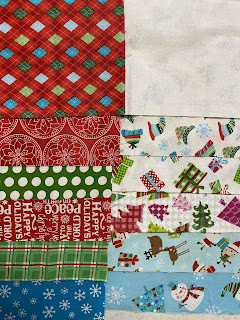 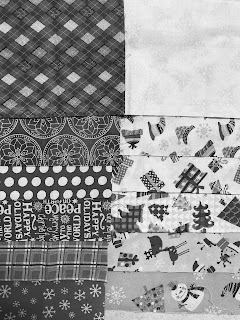 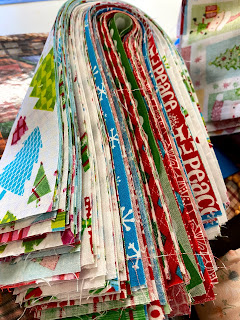 The sewing is what made me feel accomplished.  Well, the block sewing.
Hope you have a great week.

I am glad you were able to laugh at the struggles to make that phone holder. Looks like you did make a lot of progress on cutting and sewing the Peaches and Dreams.